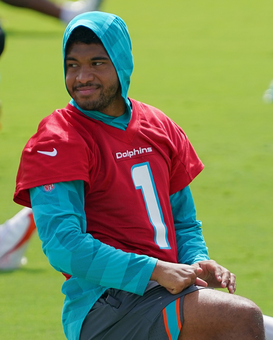 Tua Tagovailoa didn’t have much such getting the ball downfield as a rookie, averaging only 9.7 yards per completion. Does this mean that he’ll never be a successful deep-ball thrower? Or is there some chance of him turning things around?

The Dolphins, after all, have pumped a lot of speed into their wide receiver group. They signed Will Fuller, who at times has been about effective as anyone at getting downfield for chunk plays. And they selected Jaylen Waddle with the 6th pick of the draft. With his speed, he can score long touchdowns, either by getting behind defenses or by turning short catches into big plays.

And not to forgotten is DeVante Parker. He’s not as fast, but he’s bigger, friendlier target who at times has looked like one of the league’s top dozen receivers. Parker really ripped up the league in the second half of the 2019 season.

Some of Tagovailoa’s struggles last year can be tied to his playing style. As a rookie, it looked like he was just trying to avoid mistakes, settling for short, safe throws underneath. He’ll presumably be more willing to take chances in his second year. (This was the same theory with Drew Lock heading into last season; it didn’t go well for him.)

Only 4 of those 80 quarterbacks who ranked outside the top 25 were able to come back and rank in the top 5 the next season. And I see 25 of 80 (almost a third) who at least ranked above average. In the chart below, the four in the top 5 are tagged with two dots (••). The other 21 ranking between 6th and 15th are tagged with one black dot.

There have been 14 quarterbacks who’ve averaged under 10 yards per completion (like Tua). Of that group, 2008 Chad Pennington moved up to 15th, while 2018 Carson Wentz improved from 28th to 3rd. Like Tua, Wentz was in his second season.

Of the 80 quarterbacks listed below, over half (43) ranked 20th or lower again the next season, and that’s what I’m expecting we’ll see this year.

Not listed, there are another 52 quarterbacks who ranked outside the top 25 in yards per completion but who didn’t start at least eight games the following year.