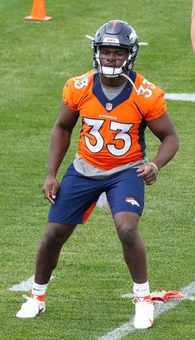 Travis Etienne and Javonte Williams look like key decisions to me. Both have the potential to be notable contributors as rookies, but neither is guaranteed to even be the most productive running back on his own team.

The Jaguars and Broncos, after all, have other backs with some ability. James Robinson had a really nice rookie season for Jacksonville, while Melvin Gordon returns for Denver. Both have the advantage of having played in the league.

Etienne and Williams (pictured) were taken early, of course. They were picked 25th and 35th, meaning those teams are pretty confident they’ll be winning significant roles early. One Denver-area reporter has speculated he thinks Williams will lead the Broncos in rushing, and that he’ll be taking over sooner rather than later.

But history shows us that there are Etienne-Williams type backs coming in every year, and that it’s more common for them to fall short of expectations in their first year.

Since 2000, 48 running backs have been chosen in the second half of the first round or the first half of the second round. That is, somewhere between the 17th and 50th picks (I’m leaving out the early first-round picks because expectations are higher with those kind of backs).

Only 11 of these 48 backs put up top-20 numbers (PPR scoring) in their first season, and only another 6 even finished with top-30 numbers. More commonly, these rookie running backs didn’t tend to be much of a factor. Injuries, of course, can be a factor at this position – four of the running backs didn’t play at all in their rookie year.

In the chart below, I’ve got the 18 team leaders tagged with black dots. I’ve got the three 2021 backs selected in this range in bold. That includes Najee Harris, since he was selected 24th by the Steelers, but he’s a different kind of prospect than Etienne or Williams – far more penciled in as a starter.

On the chart, the players are ordered not chronologically or by first-year production, but by where they were selected. Only one of the 17 running backs chosen between 18th and 28th (and this is really surprising) put up top-20 numbers in his first year. Chris Johnson. Only three of those 17 were the top back on their own team.