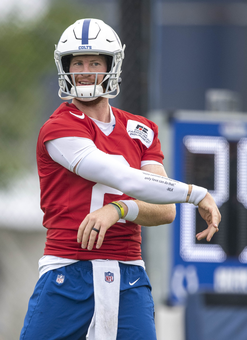 Which veterans who changed teams are you interested in?

ASK THE EXPERTS appears weekly from training camp through the Super Bowl with answers to a new question being posted Thursday morning. How the guest experts responded when we asked them: Which veteran who changed teams in the offseason are you most interested in seeing?

I’m not optimistic that we’ll see much of any team’s frontliners in the freshly trimmed preseason, but I hope to get a decent look at Kenny Golladay. In theory he’s a perfect match for Daniel Jones’s downfield aggressiveness — Golladay isn’t often open per se, but he always comes down with the ball — and there could be a lovely compounding factor in Jones’s tendency to force passes to his top guy specifically. Huge volume on consistently deep targets would push Golladay toward or even into the Top 10 at receiver. He isn’t even sniffing the Top 10 in early ADP.

I find Curtis Samuel's new situation fascinating. He goes to a new team with a better quarterback than anyone he's ever played with. Samuel is reunited with his former coaches, Ron Rivera and Scott Turner, seemingly a plus for his prospects. But Samuel languished under Rivera for three years and didn't blossom until last year, under Joe Brady. Will Turner execute many of the creative ways Brady used Samuel? Turner used Samuel more as a deep threat (Samuel's 2019 aDOT dropped in half under Brady in 2020) and it will be fascinating to see if he tries to create big plays for Samuel downfield.

I want to see what Carson Wentz looks like. He was pretty awful in Philadelphia last year, but I’m thinking Frank Reich is going to be the coach who can get him back on track. Just seeing him handle a few meaningful series in the practice games should give us an idea of where he’s at.

Mike Davis bounced around the league in his six years, playing for the Falcons this season as his fifth NFL stop. He comes off a career-best (easily) year where he ran for 642 yards on 165 carries plus caught 59 passes for 373 yards and a total of 8 touchdowns. Good enough to rank No. 12 among fantasy running backs thanks entirely to standing in the right spot when Christian McCaffrey was injured. Running backs coach Desmond Kitchens said he wanted to recruit Davis out of college and the Falcons did nothing else in free agency and the draft besides picking up the smallish Javian Hawkins (5-9, 195 lbs.) as an undrafted free agent. There is speculation that it shakes out to be a Thunder (Davis) and Lightning (Hawkins) backfield. But both are new to the team and should be very visible in practice and preseason games as the Falcons shake out their depth chart. The No. 1 quality in a good fantasy running back is opportunity. Davis gets his again this year.

I've found myself fascinated with the somewhat odd signing of Kenyan Drake to the Raiders. While Josh Jacobs is supposed to remain the primary ballcarrier, he was more ineffective last season than was expected, and the Raiders signed Drake for a reason. If Jacobs struggles or gets hurt, Drake could immediately become an extremely valuable 3-down back. I'm looking forward to seeing how the Raiders use him early in the season. He's a steal of a pick late in drafts.

At the age of 38, Ryan Fitzpatrick may have finally found a home for the foreseeable future. A playoff contender, Washington believes in itself, both their superb defense and under-rated offense. With Fitzmagic tossing them to rising stars McLaurin, Logan Thomas, and Antonio Gibson out of the backfield, he may put up 30+ TDs for the first time since his 2015 Jets season. He won't be trailing in the majority of his games, so his interception rate should decline, too.

Carson Wentz. This move can go so many ways. He goes to a Colts team with Frank Reich, who reigned as Philadelphia's Offensive Coordinator when Wentz did his best work. Can he return to form? Wentz has plenty of weapons in Indy: Jonathan Taylor, Nyheim Hines, TY Hilton, Michael Pittman and two good tight ends in Jack Doyle and Mo Alie-Cox. So another Top-10 fantasy finish is possible (he has two from 2016/2017). On the flip side, he looked pretty bad last year, but then again anybody would have behind the Eagles' injury-plagued offensive line.

I'm a Matthew Stafford fan. I think the Rams have a legit upgrade at the most important position, which could be enough to push them to the top of the NFC West and deep into the playoffs. I'd feel better about this had Cam Akers not gotten hurt, and there's also the reality that Sean McVay won't put Stafford (or any of his key starters) on the field in the exhibitions, so we'll be relying on camp reports for how things are going. But come Week 1, I'll be looking forward to watching the Rams. (Forced to choose a veteran who's actually playing in August, I'll go with Corey Davis with the Jets. Strangely, I think there's a chance he could be a nice signing for them, breaking out with a 1,000-yard season for his new team.)