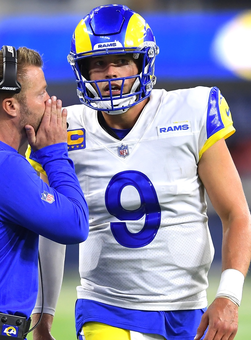 I'm in a 14 team league. I have Stafford, and given the strong game he had in Week 1, and given the horrible game Rodgers had, I'm thinking of first offering a straight-up trade for them. At this point, would you still value Rodgers higher than Stafford, or would you not advise this?

I’ve got Rodgers a little higher than Stafford. I guess that means I would make that trade, if possible, but it’s not something I would be excited about. They look like similar players, and Stafford is hot right not. On Rodgers’ behalf, the schedule looks a lot more favorable. I would much rather have him playing six games against the Vikings, Bears and Lions, rather than Stafford’s six games against the Seahawks, 49ers and Cardinals.

Have bought your magazine for decades, but first-time user of your website. Surprised I cannot find a discussion/writeup on the best method of drafting a snake draft by league size. Seems everyone (or at least in my leagues) take RBs first. Last year, I ended up 5th in both leagues and looking for something "new". One league has drafted already, and I tried "best available" using your customized top-200 (adjusted by the number of players taken in previous drafts and league scoring). Out of the 8th (out of 8), took a WR/TE/WR/RB in first four rounds. Seems so risky not to take 'Best Available" RB instead like I would have previous years.

I don’t think there are enough good running backs that you can go into a draft operating under the assumption that you’ll be selecting running backs with your first two picks. Unless you’re picking in the first half of the second round, you could be left choosing somebody like David Montgomery, Miles Sanders or Chris Carson with your second round pick. You would never take one of those guys ahead of Davante Adams, Tyreek Hill or Travis Kelce. I think it makes more sense to go in with a top 20 or top 30. Select your first two or three players, and then start thinking more about positions at that point.

What stood out to you that was knowable/unknowable from this limited preseason, in which players barely played? Which items were perhaps confirmed and which do you wish we had more of any eyeball? For instance, while I was off Rodgers and would never take Adams as high as he deserves to be drafted, I was shocked at how poorly practiced and unready they were on Sunday. I'm not even talking about the low-hanging fruit of Rodgers heave INT, there were numerous instances of rust and low energy all over both sides of the ball. Were there any reactions from the first week that stem from what wasn't known in pre-season eyeball test(s)?

Thanks for the nice words. Some make the case that the preseason is meaningless. And they’ll perhaps point to DeVonta Smith and JaMarr Chase, who each dropped 3 passes in a preseason game but played well in Week 1. And I agree with your observation that the preseason isn’t as meaningful as it was in the past, when more teams would give their regulars more playing time. But there is some value to the getting an admittedly brief look at these guys. Consider, for example, some of the notable players whose value changed in August. I hadn’t thought much at all about Ty’Son Williams or Tony Jones before camps opened, but it was clear from that first preseason game that those guys were going to make the 53-man rosters of their teams. It was clear Corey Davis was going to be good for the Jets, and he delivered in Week 1. It was equally early that Marquez Callaway would be a factor for the Saints, and that will be coming (even if Callaway caught only 1 ball in his opener). Prior to camp, it wasn’t clear if Jameis Winston or Taysom Hill would be starting; that got answered. With Arizona, the preseason strengthened my belief that Chase Edmonds and James Conner would be sharing time. And the preseason altered by expectations for Gabriel Davis, as a guy who’ll be contributing impact catches for the Bills. I don’t think there’s any question that those who are paying attention in the preseason will outperform those who are not.

Now that Latavius Murray signed at Baltimore, how do you see him ranked in 1 point PPR?

It doesn’t look like the Ravens are going to run the ball quite the same way this year. Their running game was different on Monday night. Part of that can be attributed to working in new players (both on the offensive line and the backfield), but I think it’s also tied to them wanting to juice up their passing game. I’m not super optimistic about their backs right now. I don’t think there’s a 1,000-yard rusher there. I think they’ll be rotating bodies through, and I don’t see a guy who’s a standout. In their opener, Ty’Son Williams started, but Murray was in on the second play and they split time throughout. Outside of the 35-yard touchdown on the fourth-and-one play, they weren’t effective. They’re bringing up Devonta Freeman off the practice squad for their next game; I imagine he’ll get a few carries. And I would think we’ll see LeVeon Bell before long. The only plus in this backfield is that I think they’re going to catch more passes this year, with the change in offensive focus. Williams caught 4 passes on Monday night. (Murray didn’t catch any passes in that game but presumably will be worked in more as he better learns the offense.)

With Sony Michel in L.A. and Cam Newton not around to vulture rushing TD's, I would think Damien Harris would be ranked higher. Why not?

I don’t think he’ll catch many passes. And I’m not sure how much better Harris is than Rhamondre Stevenson. To me, Stevenson looks like another LeGarrette Blount – not quite as big, but faster. It’s possible they’ll go to more of a one-two punch later in the year, and maybe Stevenson gets a chance to be the starter in the second half of the season. But in general, I agree with your point. Harris looks like a good back.

I know you guys are high on Tony Jones but if Raheem Mostert misses multiple weeks would you drop TJJ and pick up Eli Mitchell?

To me, Jones looks like what Latavius Murray has been in recent years. He’s the No. 2 back in New Orleans, and a solid guy who should be on rosters. But Mitchell could be something special. He could be the guy in San Francisco. If I were walking into a draft today, I would definitely select Mitchell before Jones.

Is there any progress with Washington State legalizing fantasy sports gambling?

Washington is one of the few outlier states. You can’t participate in daily fantasy or national fantasy contests here. That makes the national television broadcast awkward, with viewers watching adds for a product (Draft Kings) they can’t buy. Washington recently opened the door a crack on sports gambling; it’s now allowed at some tribal casinos around the state.

Received trade offer for Amari Cooper receiving Keenan Allen and Robby Anderson in 1/2 PT PPR. What is your viewpoint

I’ve got Allen higher than Cooper on my board. In his last 12 full, healthy games with Justin Herbert at quarterback, Allen has caught 102 passes for 1,009 yards and 7 TDs. That’s over 8 catches per week – would work out to about 145 in a 17-game season. So if you’re giving me Allen in exchange for Cooper, while also tossing in Robby Anderson, I’m interested.

There’s an “Ask The Experts” column that went up earlier today, with guys weighing in on their choices. I went with Marquez Callaway there; I think he’s the No. 1 receiver in New Orleans for now, and he’s going to be just fine. I thought about Ezekiel Elliott. I thought he played well in the Tampa Bay, with a couple of killer blocks in pass protection. He just didn’t post notable numbers because of the opponent they were playing. Elliott will be good. Josh Allen, Jonathan Taylor, Aaron Rodgers, Davante Adams

Anyway to get a Tuesday version of the hottest pickups of the week before the actual Index rolls out Wednesday? A lot of leagues waiver wire goes into effect Wednesday 12 am is why.

We send out a Tuesday version, with a quick hit on each team. We try in that product to identify the players who are the best guys to go after on the waiver wire for the week. That’s early guesswork, because we haven’t looked at each game thoroughly.

In a dynasty keeper league auction with $200 salary cap. . Where are their values for this year and the future? Trevor Lawrence $7, Jalen Hurts $16 or Trey Lance $1? Their value will increase 30% next year.

So Lance costs $1.30 next year? And Lawrence costs $9.10? Where do I sigh up? They all look underpriced to me. With his pass-run game, I think Hurts will outperform $16. If he stays healthy, he’ll be a top-10 quarterback. If he can continue to stay healthy in 2022, he’ll outperform $20.80. With the rookies, you have to wait a little while for it to click in, but I think they’re also underpriced. Lance could be a Hurts-type guy in 2022, and for less than 1 percent of your salary cap.