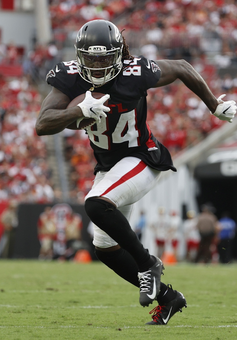 Ian Allan answers your fantasy football questions. In this edition. Is Cordarrelle Patterson for real? Are the Jets ruining Zach Wilson? What's up with LeVeon Bell? Miami's quarterback switch. And more.

So is Cordarrelle Patterson actually gonna be a thing this year?

I’ve been impressed. I was surprised in their first game, when he rotated in at tailback for most of their second series – it looked more like a one-two punch backfield, rather than Patterson being just a change-of-pace player. He carried 7 times for 54 yards in that game (and was also on the field in a couple of goal-line situations). And Patterson followed that up by playing well against the Bucs. He ran for only 11 yards on 7 carries in that game, but he looked better than those numbers indicate – he ran for a touchdown, caught a touchdown and scored a third touchdown that was nullified when they checked the security cameras and saw that his foot had inched over the sideline. Looks like a nice player to me. He doesn’t have as much experience at the position as Mike Davis, but he’s more explosive. That makes him one of the season’s most surprising players thus far. Back in August, I wasn’t sure that Patterson was even going to be the backup tailback on this team – I thought they might have signed him primarily to serve as a kickoff returner. Patterson is 30, but he’s probably still one of the very best in the league in that capacity – the Bucs consistently kicked away from him on Sunday. Patterson has scored on a kickoff return in five of the last six seasons, and I would think he’ll get another such touchdown at some point this year. Patterson was drafted as a wide receiver and has played that position for most of his career, but I like him at the running back position. He’s a big dude – listed at 6-foot-2 and 220 pounds. If we’re ordering the backup running backs 1 thru 32, I think Patterson goes in the first half (maybe the top 10).

Thoughts on LeVeon Bell. If he were to be cut loose by the Ravens would he be an instant upgrade in San Francisco?

I saw a blurb the other day. Bell on Baltimore’s practice squad, but this writer pointed out that he was one of their protected players. That is, teams are allowed to have a practice squad, but they are only allowed to protect a few of those players. Jacques Patrick, for example, was recently signed by the 49ers. Patrick was on Cincinnati’s practice squad, but he wasn’t protected. That Bell is protected in an indication that the Ravens have some thought they’ll be bringing him up at some point. Presumably he’s still working his way in game shape (having not been with any team in August). Right now, I don’t think it’s super likely that Bell at some point this season will develop into a top-20 back. I don’t know that he is a great fit for the kind of running back that either San Francisco or Baltimore is looking for. In the Kyle Shanahan system, I think they’ll looking for those decision, downhill runner types. Bell is kind of the opposite of that – arguably the league’s most patient running back. The Ravens, I think, will be using combinations of backs this year, with Bell looking unlikely to truly separate himself from guys like Ty’Son Williams and Latavius Murray.

What impressions do you have, so far, on Zach Wilson and the Jets offense? It seems like we're seeing a repeat of the David Carr situation, where a rookie QB starts immediately and can't do a thing behind a terrible offensive line with minimal run game support. Wilson seems to have talent, but having him roll-out on every route and throwing on the run is going to create lots of interceptions. The Jets coaching staff needs to scale back the offense if, for no other reason, to keep Wilson from getting killed. I'm also thinking they should have brought in a better back-up QB as he's probably going to play a lot this season. (At least Darnold had Josh McCown when he was starting as a rookie.) I understand the financial realities of trading Darnold and starting anew at the QB position, but it's painful seeing Darnold playing well while the Jets are seemingly on their way to ruining another QB prospect.

They haven’t been helped by scheduling, opening with the Panthers, Patriots and Broncos. They’ve got the Titans and Falcons coming up in Weeks 4-5, and I think we’ll see the offense start to have some success at that time. I remember seeing Wilson do some decent things in the preseason and thinking they would do some of the things we’re now seeing from the Lions – a lesser team, but one with some ability to move the ball. In the preseason, it seemed to me that Wilson might be pretty good in terms of avoiding sacks (with the way they were constantly putting him on the move away from pressure). That hasn’t happened. I’ve seen a couple of plays where he’s had ample time to get the ball out of his hands, throwing it away if necessary, but has instead gotten himself into trouble by trying to scramble around. But it’s early. I’m not giving up on Wilson yet, and I still think Corey Davis has considerable value as the featured pass catcher in that offense.

An early season ranking of the best to worst Passing and Rushing Defenses would really help a lot in setting early season lineups. Just a thought until several games totally shakeout the worst D’s.

After two weeks, the three best run defenses have all been teams that didn’t rank higher than 20th last year – Bills, Cowboys, Panthers. Then we see some of the familiar names you expect to see at the top (Bucs, Steelers, Saints). The four worst run defenses so far have been four who all ranked higher than 20th last year – Chargers, Dolphins, Seahawks and Kansas City. Kansas City, of course, had the misfortune of starting the season against the two best rushing offenses (I still consider KC to have a middle-of-the-pack run defense).

For passing production, the Eagles, Bills, Chargers and Patriots have done the best job limiting numbers so far. The Ravens, Falcons, Cowboys and Bucs have allowed the most passing production. I will be very interested to see how Matthew Stafford performs against that Tampa Bay defense on Sunday.

What do you think of the skill players for the Dolphins now that Brissett is under center? I think Gesicki could start to get more targets now. What are your thoughts?

I wouldn't give up on Gesicki. He's a really good pass-catching tight end, with unusually good hands. (Also in a contract year, for whatever you think that's worth.) They'll get him going. I do not, however, see Gesicki getting "sparked" by Jacoby Brissett. Gesicki was the one Miami pass catcher last year who was actually better than Tua was at quarterback. And Brissett isn't a great deep-ball thrower. I don't see him as being the guy downfield passer who ignites guys like Waddle, Parker and Fuller.

Looking thru our league rules, I just discovered that blocked FG and blocked punts are worth 4 points for the defense. What team has had the best block percentages recently?

These plays are so rare, I wouldn’t worry about them. There have been only 11 and 13 blocked punts in the last two seasons. So if you pick a team at random, you’re looking at an average of about one block per every 43 games. In the last three years, seven teams (out of 96) have had more than one blocked punt in a season. The Patriots are the only team that’s done it twice, with 2 blocks in 2018 and 4 in 2019. Only two teams in the last three years have had more than 2 blocks in a season (2019 Patriots and Lions last year).

12-team league. Four points passing TD. All others six points. Been offered Mahomes, Ridley and Mike Williams for Brady and Kupp. In first place now. What do you think?

On my projections, I’ve got Mahomes as a little more than 3 points better than Brady per week. Brady’s been playing great and has all those weapons, but Mahomes tends to put up more yards and is also a factor as a runner (I assume we’re including 1 point for every 20 passing yards and 1 for every 10 rushing yards). I’ve got Kupp at about a point per week better than Ridley and Williams, but with those other guys, there’s the advantage of there being two of them, helping you negotiate bye weeks and injuries. So I’d do the trade. In the question, there is no mention of yards, so I suppose it could be a TD-only format. If it’s going down that way, then I would still do the trade, but it wouldn’t be as overwhelming. I was Mahomes as better than Brady and Kupp better than Williams/Ridley (but not by quite as much).

I'm a very long-time reader of your magazine with my first question to you. Should I make a trade offer trading away McCaffrey, Robert Woods and Noah Fant for either Davante Adams, Waller and Ekeler or for Carson, AJ Brown and Kelce? My other RB's are Gibson, Henderson and Gaskins and my other WR's are Metcalf, Claypool, C. Davis and Aiyuk, with Lamar Jackson as my QB. (1/2 point PPR league with 10 teams).

Lots of good players. (Why are three different teams suddenly looking to get rid of three of their first four draft picks?). I haven’t looked through all of the different player projections. There are 17 different players listed. In general, McCaffrey looks like the No. 1 player here, while the Adams-Waller-Ekeler player combo looks really nice.