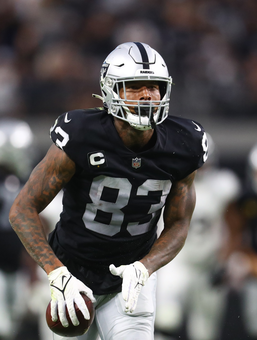 In dynasty leagues, the decision making gets particularly tricky at tight end. Would you prefer a player who’s a superstar right now? Think Travis Kelce or Darren Waller? Or would you instead take a youngster who might a superstar for a lot more years? Like Kyle Pitts or T.J. Hockenson?

George Kittle is a factor, with his unique combination of production and injuries. He’s 27, but his body keeps breaking down. (And here we are, starting Week 4, and Kittle has a calf injury that might sideline him for tomorrow’s game against Seattle.)

But the first month of the season has me wondering if that’s the way route to go. How long is it going to be before Pitts becomes a difference-making tight end? And is he ever going to ascend to the uber-elite plateau that Kelce and Waller are on right now?

Pitts’ first three games have been underwhelming. The Falcons aren’t very good, and they haven’t used him a whole bunch. In their game Sunday at New York, their other tight end, journeyman Lee Smith, saw just as many targets (3).

Why would the Falcons select Kyle Pitts 4th in the draft, then not use him? It’s weird. When Arthur Smith was in Tennessee, he never heavily utilized Jonnu Smith. Smith is a talented guy, but the Titans never had any interest in trying to turn him into a top-5 player at the position.

Waller is 29. He looks like he’s going to be a crushing superstar in the 2021, 2022 and 2023 seasons. Right now, today, I think I’d take those three awesome seasons rather than the bag-of-beans hope that Pitts at some point will develop into one of those guys (with the added benefit of having a lot more of his career left).

Hockenson can be considered. He’s also a lot younger than Kelce and Waller, and he’s closer than Pitts into developing into a big-time player. The Lions have been using Hockenson a ton.

Kelce is 32, so while he’s the best tight end right now, I’m putting him behind those three.

The following rankings assume PPR scoring. I’m thinking it’s a 12-team league, with teams holding the rights to players indefinitely. And I’m thinking each team is carrying about three tight ends, with one playing and perhaps another getting some time as a flex. So when I into the 20s and 30s, I’m open to considering players who won’t be much of a factor right now. Irv Smith, for example, is out for the year, and I’ve got him 31st. He’s followed by Kylen Granson, Cole Kmet and David Njoku, and I wouldn’t be selecting any of those guys with the expectation they would help your team at all in 2021.

Each Saturday I turn my attention to dynasty leagues, rotating between the four main positions. You can access previous player lists by using the “Past Issues” navigation box in the upper right portion of the page.