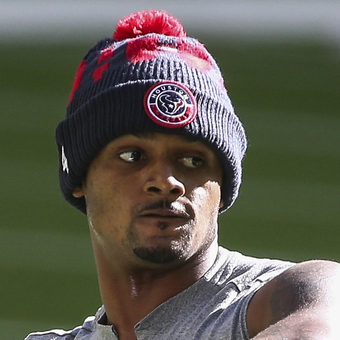 Guess it's time to make sure Deshaun Watson is on fantasy rosters? The Houston Chronicle reported yesterday that the Texans and Dolphins have agreed on terms of a deal that will send the quarterback to Miami. The Dolphins, apparently, are seeking clarity on a possible suspension.

That's a pretty big potential stumbling block, and could still prevent a deal from going down. Miami's draft pick compensation would reasonably be affected by the prospect of not having Watson this season.

But the NFL itself has showed reluctance to actually suspend Watson, or place him on the Commissioner's Exempt list, with everything out there at this point just accusations, rather than charges. It's a little odd (the NFL has certainly acted with less in the way of official charges in the past), but here we are. The Dolphins are struggling, the Texans aren't planning on playing Watson, and it sounds like a deal -- and Watson actually starting games this season for Miami -- are realistic possibilities.

Sure there'll be a PR hit for the Dolphins, but they're 1-6, so what's a little PR hit against the possibility of landing one of the league's more talented quarterbacks? Innocent until proven guilty and all that.

Watson, in Miami, would undoubtedly make the Dolphins more entertaining to watch, and get more out of their offense. The quarterback will look to throw the ball downfield, getting the most out of the team's receiving corps, far more than Tua Tagovailoa.

Among quarterbacks with at least 100 pass attempts the past two seasons, only four quarterbacks have averaged more yards per attempt than Watson last season. Nobody did it a year ago; all four are in the midst of those seasons, so could still wind up behind Watson.

Then there's Tagovailoa, who was one of the least aggressive passers in this regard a year ago, and is the same this year. Miami backup Jacoby Brissett, incidentally, is even worse, at the very bottom of the list for his work this season. (Data compiled using the search tools at pro-football-reference.com.)

I don't know if a trade is actually imminent or not, but Miami's offense would definitely be more entertaining, and guys like DeVante Parker, Will Fuller and Jaylen Waddle more productive, with more big plays. A potential negative for Mike Gesicki, I suppose, though more yards and touchdowns would probably be a good thing. We'll see.