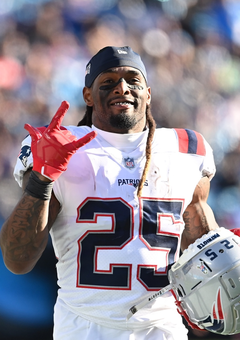 Cleveland plays at New England on Sunday, and it’s looking like both teams will be without their top 2 running backs. The Browns definitely won’t have Nick Chubb or Kareem Hunt, while the Patriots practiced all week without Damien Harris and Rhamondre Stevenson.

Harris and Stevenson aren’t officially out yet; they’re questionable on the injury report. But they would need to be cleared by a neurologist today, completing the concussion protocol. I can’t remember the last time a running back didn’t practice all week, then was cleared to play on the Saturday before a game.

More realistically, both teams will field replacement running backs, and those players are intriguing for fantasy purposes. Both of these teams have quality ground games, with a strong track record of punching the ball in from close range. The Browns have scored a league-high 16 rushing touchdowns, while the Patriots have scored 11 (only Cleveland and three other teams have run for more).

Cleveland is definitely starting D’Ernest Johnson, and he’s already proven that he can be a good starter, running for 146 yards in a Thursday night game against the Broncos.

For the Patriots, I think they’ll be starting Brandon Bolden. He’s a modest 31-year-old who’s been a special teams players for most of his career, but he played surprisingly well last week against Carolina, gaining 54 yards on 8 carries. If you’re in need of a running back for Week 10, Bolden could be the best lifeline available on the waiver wire in your league. On the downside, I expect they’ll also mix in J.J. Taylor some, and they’ll be working against a good run defense (only two teams have allowed fewer rushing yards than the Browns).

It’s near the goal line where these backs look really good. Harris has carried the ball 12 times when the Patriots have been inside the 5 – 2nd-most in the league. For Cleveland, Chubb and Hunt have combined for 12 carries inside the 5. Right now, it’s looking like it will be Johnson and Bolden who’ll be getting those goal-line touches this week.

While I’ve got these numbers out, I will run the team-by-team breakdowns. These are through Week 9 (so don’t include the Dolphins-Ravens game).

Note on these that they include 2-point conversions, treated as regular plays (even though that’s not the case). I’ve put the successful 2-point conversions in with the touchdowns, which is maybe not a great idea, but whatever. These are home-cooked stats, so we’re making the rules.

There is another notable injury situation that comes to mind on the list. Alvin Kamara has carried 9 times inside the 5; he’s an elite player. But he’s also not playing, so Mark Ingram looks like a solid fill-in option for Week 10.

And notice that Dalvin Cook has scored on only 1 of his 8 carries inside the 5, about the worst rate in the league. He was a scoring machine in 2020. The Vikings are playing against a Chargers defense ranked last against the run, giving Cook some chance of getting things right this week. Cook has off-field legal issues that showed up in the headlines this week, of course, but on the field, I think he’ll be putting up big numbers in Week 10.