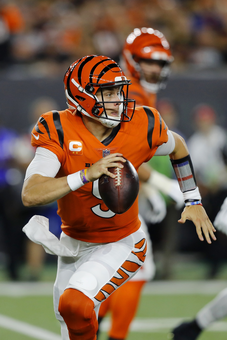 Burrow gets the better of Lawrence -- again

It’s not quite the Lions or Cowboys hosting games on Thanksgiving, but the tradition seems to be for Cincinnati to host an early-season undercard-type game in Prime Time. Sneak it in there early, I think, while viewers are willing to watch any game that has a ball with “NFL” stamped on the side. Six years in a row the Bengals have played in September in the Monday or Thursday slot.

This one was more notable than most, with the last two No. 1 overall picks squaring off for the first time they met in the college football championship in the Superdome. And while these are modest teams, as usual there were a number of notable developments.

Trevor Lawrence has gotten off to a rough start, with too many sacks and turnovers, but on this night it was easy to see that he’s going to be an above-average quarterback – and maybe sooner rather than later. His passing numbers weren’t phenomenal (17 of 24 for 204, with no touchdowns or interceptions) but he hit on a couple of real nice downfield balls. And for long stretches of this game, he was able to drive his offense up and down the field.

Most notably for fantasy purposes, Lawrence in this game for the first time started using his mobility (which is considerable). About four times, he converted third downs, including a touchdown. He finished with 36 yards on 8 carries. If Lawrence starts running for 25-plus yards per game, it’s going to make it a lot easier for him to finish with top-15 numbers in a lot of weeks. Lawrence came up short at the goal-line on a fourth-down run that could have pretty much iced the game, but the arrow is pointing up.

Also a good night for Joe Burrow. Dreadful for most of the first half, but he got it going in the final two quarters. The Bengals didn’t punt after halftime, and he finished 25 of 32 for 348 yards. Less than a year removed from knee surgery, Burrow isn’t moving as much as he did as a rookie, but they used him on a couple of quarterback sneaks, including a touchdown that was overturned.

The Bengals had the ball four times in the second half, and they scored on all of them – three long touchdown drives, then a masterful 83-yard drive for a field goal to win it while simultaneously draining the final 5:33 off the clock. A nice night.

Travis Etienne is out for the year with a knee injury, but I don’t think that’s affected the Jaguars too much. If Etienne were healthy, he would be only a chance-of-pace back behind James Robinson. At least for now, I think Robinson is just a better back. He played well in this one – at least for a half.

Robinson carried 12 times for 64 yards and a touchdown, helping stake Jacksonville to a 14-0 lead at the break. He was not as effective in the final two quarters, when the Bengals tightened things up defensively and starting putting together long drives. Robinson carried 6 times for only 14 yards in the second half, though that included a good effort run for a touchdown.

For the Bengals, Joe Mixon was the exact opposite. He carried 5 times for only 14 yards in the first half, with the running game simply going nowhere. But they got things revved up in the second, using an extra lineman more often and with guys playing like they had been chewed out in the locker room. Mixon ran for 53 yards and a touchdown on 11 attempts in the final two quarters.

Mixon was running particularly hard in this game, violently trying to break tackles and hurdling a defender at one point. That style of play might have contributed to him picking up some kind of injury late in the game. He was on the sidelines for almost all of the final drive – there wasn’t a doctor with him, but his leg seemed to be bothering him.

Mixon has really good hands, but they haven’t been using him much in the passing game. Three weeks in a row he’s caught only 1 pass, and they’ve gone for a total of 6 yards.

If Mixon misses any time, they’ll plug Samaje Perine into the lineup, and he looks like a decent backup to me.

For the Jaguars, Carlos Hyde normally gets some change-of-pace carries, but he missed this game with a shoulder injury.

DJ Chark is likely out for the year with a broken ankle. That’s a blow to Jacksonville’s offense. It takes them down from having three pretty good wide receivers to now just two. For this game, they replaced Chark with Tavon Austin, and while Austin is a former top-10 pick, he’s not a notable pass catcher. There will be no viable Chark replacement.

The Jaguars still have a pair of good receivers. Both Marvin Jones and Laviska Shenault might have outperformed Chark had all three receivers stayed healthy. Shenault was the star on this night. He was the busiest, and he made all the big catches. Shenault normally catches quick throws around the line of scrimmage, but in this one he also snuck deep for a 52-yard reception, converted a big third-down late and had a catch-and-run that moved the ball down to the 1-yard line (setting up the pivotal sequence at the end of the half).

During the preseason, it looked to me like Marvin Jones would be the best of the Jacksonville receivers, but he wasn’t much of a factor in this one. He caught only 3 passes for 24 yards, and those were the only balls thrown his way. But with Lawrence growing before our eyes and Chark out for the year, I think Jones will be better in the remaining 13 games. To me, both Shenault and Jones are candidates to be top-30 receivers the rest of the way.

Like the Jaguars, the Bengals were down to playing with only two of their three good wide receivers. Tee Higgins missed a second straight game with a shoulder injury. That probably contributor to busier nights for Tyler Boyd and JaMarr Chase -- they combined for 20 targets.

Boyd is a good slot receiver, and he was in top form in this one. He tends to work the middle of the field, and he makes the catches. He caught 9 for 118 against Jacksonville. He suffered some kind of wrist injury on one of his catches late, but it didn’t seem to be anything serious.

Chase had a big catch in the middle of the field late, when Boyd was concerned about his wrist. But the rookie tends to do most of his worst outside. His size and speed aren’t special, but he seems to be better than most at adjusting to balls when they’re in the air, coming up with downfield catches. He was averaging 20 yards per catch coming in, and had a 44-yard reception early in the third quarter to help get the Bengals going. There’s a rapport between Chase and Burrow.

C.J. Uzomah had the best game of his career on this night. He caught both of their touchdowns, and he had two really big catches on the drive that set up the game-winning field goal. He finished with 5 catches for 95 yards.

But I wonder if Uzomah is another Dalton Schultz (who caught a pair of touchdowns on Monday night). With both of these guys, they’ll be picked up in fantasy leagues, but you wonder if either will ever have another game with 2 TDs in their careers. They’re fine, but they seem more like supporting players, rather than guys who’ll be used extensively going forward. The Bengals have the three really good wide receivers, and I think they’ll continue to want to feature them heavily.

In general, Uzomah and Schultz to me look like second tight ends in a typical 12-team league – good enough to be rostered, but not really guys you want to put in your lineup.

I was surprised how much the Jaguars used Dan Arnold. They traded for him on Monday, yet somehow got him to Jacksonville and taught him a few plays (before then flying to Cincinnati). Arnold caught a pair of passes, and they were seemingly going to go to him in the end zone on a play where the defensive back was called for holding.

The Jaguars have at least two other tight ends who played more than Arnold, but he seems to be the guy they want to use as a pass catcher. When he was on the field, it was because they had a play designed to get him the ball. So I will put Arnold in that secondary tight end group with Uzomah and Schultz – in general, looks like he should be rostered as a second tight end in 12-team leagues.

And that’s probably a good place to call it a night.