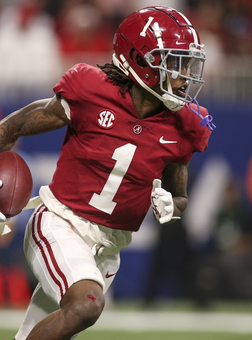 Ah James Robinson. Where is he now on the dynasty list? We seem to have the opinion that Achilles injuries are pretty much career ending. At this point, would you rather stash someone like J.K. Dobbins instead?

I would much rather have Dobbins. He’s four months ahead in his rehab, and it’s a less troubling injury. Dobbins should lead the Ravens in rushing next year – looks like a nice player. With Robinson, you’re not sure if he’ll be ready for the opener, or if he can run with the same burst, power and confidence. Jaguars definitely won’t head into training camp under the assumption that Robinson will be what he’s been the last two years. I imagine they’ll be bringing in another notable back. They’ll also have Travis Etienne, who in his brief playing time in the preseason looked more like a third-down back rather than a featured guy.

I've been using your service about 35 years with way-above-average results. I'm in 4 dynasty leagues (ppr mostly) where we keep 12 players each year. Part of my success stems from dropping players at the end of the season and adding replacements that sometimes pay great dividends in future years. For example, I'm ready to let Julio Jones go. Who from this list might break out next year? R.Penny, K.Herbert, R.Gage, G.Davis, J.Meyers, A.St. Brown, M.Callaway, K.J. Osborn, Valdes-Scantling. Any other suggestions?

Gabriel Davis. He was a disappointment overall this year, but he’s ascended recently, with 4 TDs in his last three games. He’s different than their other receivers, with a bigger body, and it looks like Josh Allen is developing a comfort level with him. I think it looks pretty firm that Davis will be the 2nd-best wide receiver in that offense next year (behind Stefon Diggs), and that’s a team that can really throw it around. Some chance that Davis is a top-20 wide receiver next year, and that puts him well above everyone else there on that list. Amon-Ra St. Brown is a solid possession receiver (you probably saw the Factoid I posted yesterday, showing that he ranked 2nd in the league in receptions in December). But I don’t know that St. Brown will ever move up from being a possession or contributor-type receiver to a difference-maker kind of guy. Lions will probably obtain a wide receiver in the offseason who’s more talented. With the running backs, I would expect Khalil Herbert to open the 2022 season as the backup running back for the Bears. Rashaad Penny is closing with a nice little run of games against bad run defenses at the end of the season (which should continue on Sunday) but I don’t expect him to enter next season as a starter. More likely to be a backup or part of a one-two punch.

The offseason is around the corner. In our league we draft college players like the NFL does . Looking for the best site to follow the ins and outs of college players. If anyone could help that would be great.

I looked at three mock drafts, including CBS Sports, The Sporting News and Todd McShay of ESPN. None of them have a running back or a tight end going in the first round, and none of them have a quarterback or wide receiver in the top 7. So doesn’t look like a strong draft, for fantasy purposes, in terms of having a can’t-miss badass coming in and ripping things up. Last year we had Trevor Lawrence, Kyle Pitts and JaMarr Chase going in the top 5. There is no player like that in this draft.

Three quarterbacks that these analysts (at this point) believe will go in the second half of the first dozen picks: Malik Willis (Liberty), Kenny Pickett (Pitt), Matt Corral (Ole Miss).

As it stands, if I were in a dynasty league, Jameson Williams (pictured) would be the first rookie I would select. And for scouting these guys, the bowl games are useful -- a chance to see them playing against better opponents with more NFL-caliber players.

Every year, late in the season, we see scrubs on bad teams turning into fantasy darlings. This year we got Amon-Ra St. Brown and Craig Reynolds of the Lions, among other examples. My theory is that these bad teams tend to play loose and free because there's no pressure, while established fantasy stars on playoff contenders disappoint with their teams going more conservative. St. Brown seems to be the go-to guy in Detroit. Is it time to consider starting him over someone like CeeDee Lamb or Diontae Johnson?

I like St. Brown. Nice story. He’s caught 74 passes. Since the merger, that’s the most of any wide receiver selected after the first two rounds (see chart below). But I wouldn’t be thinking about starting him before Lamb or Johnson. Those guys are elite, difference-making wide receiver. Johnson has had at least 70 yards in eight of his last 11 games, and with over twice as many touchdowns. Lamb will be playing at home, where the Cowboys have been exponentially better, and playing against a defense that’s allowed the most touchdowns in the league against wide receivers.

Can you break out your crystal ball and tell us what you think the Steelers offense will look like in 2022? It seems like Matt Canada needs to be fired as their offense has been terrible all year and hasn't improved. Big Ben should retire - he's played too long as it is - and I suppose Mason Rudolph will be given the reins while they groom a new back-up. (Unless, of course, they decide to go after Russell Wilson or Rodgers.) They also need an overhaul of the offensive line, but can hopefully stand pat with Najee Harris and their receivers' corp. To me, Tomlin carries a lot of responsibility as Canada's promotion, rather than hiring someone outside the organization with some new ideas, was clearly a big mistake by the team's leadership.

Completely rebuild, I imagine. Roethlisberger will retire in a couple of weeks, most likely, and I expect the new starter will be someone from outside the organization. Not Mason Rudolph. I wouldn’t think the Steelers would have any interest in trying to put together an offer for Aaron Rodgers, Russell Wilson or Deshaun Watson; that’s not their style. But they’ll find somebody. And they’ll put some resources into the offensive line. They’re fine with their rookies at tailback and tight end, and they’ve got a pair of good young receivers. They need to figure out if they’re re-signing JuJu Smith-Schuster. With the Steelers have other, more pressing areas that need to be addressed, I would think there will be other teams that are willing to pay more for him.

I’m in an empire league with standard scoring and a. Superflex position and I’m in my third straight Super Bowl (1-1 thus far). I was rolling until Fournette got injured. Aaron Jones is my other starting RB. I have a choice of Tony Pollard, AJ Dillon, Boston Scott and Dare Ogunbowale. Thoughts?

When Miles Sanders and Jordan Howard went down with injuries, I was thinking I would be high on Scott in Week 17. The Eagles ran for 238 yards and 2 TDs when they played Washington two weeks ago. But after looking at Scott more closely, I’m not confident they want him out there in a full-time kind of role. He’s a smaller, limited back. He started three games earlier this year (when Sanders was on IR) and in each of them they had him splitting time with Howard – Howard actually had more carries and rushing yards in those games. Howard (stinger) was able to practice some Thursday, and Nick Sirianni says he’s hopeful he’ll play. As it stands now, it’s looking like a one-two punch backfield. Also with Scott, note that he hasn’t been used much as a pass catcher. Additionally, Washington has had a top-5 run defense for much of the season. As poorly as they played against this scheme two weeks ago, they’ve now had a chance to think it over, making adjustments to how they’re defending. So while maybe you have to start Scott, I’m not excited about him. And nor would I want to use Ogunbowale. He was thrust into a full-time role last week (when Robinson got hurt), but he’s really more of a third-down back. Now that the Jaguars have had a week to re-work their offense, I would think some other running back will factor prominently into the offense, maybe even leading them in rushing. You may have to use AJ Dillon.

Hey Ian. Subscriber since roughly 1993! First of all. Merry Christmas and thanks for all you and the team do. Ok…on to football. 1/2 PPR. Super Bowl berth on the line. Need to select my RB2 and Flex. Options include…. Henderson, Pollard, Foreman, Stevenson, Penny, Thielen, Renfrow. Basically pick 2 of those with at least one needing to be an RB. Currently leaning Pollard and Thielen. Henderson seems to unfortunately be a change of pace guy now. So is Pollard though. Penny has a decent matchup but was awful last week. Thielen coming off injury. Foreman plays tonight. Renfrow rebounds this week? Ugh. Decisions decisions

One of the starters is Thielen/Renfrow. With Thielen gimpy, probably Renfrow. With the running backs, Foreman is a possibility, but then you are elimianted from using Stevenson if Damien Harris is again ruled out. If Stevenson is a solo guy, he would be your top player. I might be included to leave that possbility open, plugging in Penny if necessary. Bears just put their big run-stopping DT on COVID list. But a difficult call, so it will tough to connect on both of the two choices.

I haven't seen anything indicating that Hill is out for sure.

I would be inclined to wait until Sunday, subbing in somebody else if he's not available.