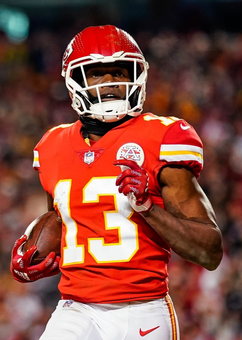 Unlikely the Bengals cool off Mahomes

A letdown following an emotion-draining overtime win over Buffalo seems like the only possible concern for Kansas City here. Its offense has been putting up huge numbers, including 4-plus touchdowns and 30-plus points in six of its last seven. Cincinnati has held its first two playoff opponents under 20 points, but neither Las Vegas nor Tennessee is playing at Kansas City's level.

Patrick Mahomes has upped his game in the postseason. His numbers were great but not otherworldly during the season (285 passing yards, with 37 touchdowns, plus 2 more on runs). But in the playoffs he's thrown for 404 and 378 yards, with 8 TD passes, while also running for an additional 98 yards, with a touchdown dive last week. Both of those games were against top-10 pass defenses; Pittsburgh probably wasn't as good as its ranking, but the Bills had the season's No. 1 group. Cincinnati ranked just 27th defending the pass, and while it's allowed only 1 TD in each of its first two playoff games, neither Derek Carr nor Ryan Tannehill are on the level of Mahomes. Mahomes threw 13 interceptions during the season, but the vast majority of those were the first half of the year (just 4 in his last 11 games, including the playoffs). Two of his three highest rushing totals have come the last three weeks, as well; he won't be shy about running it should the situation call for him to make plays with his legs.

Mahomes put up fairly modest numbers in the Week 17 loss (259 yards and 2 TDs); on that day, Kansas City ran for 155 yards and 2 TDs. That kind of production is less likely to be repeated, with this being a fairly mediocre ground game (115 yards per game in the regular season, ranking 16th) and Cincinnati being much better defending the run (5th) than pass. Would be a surprise if Mahomes finishes under 300-plus passing yards and 3 total touchdowns; should be the week's top quarterback.

Kansas City's strong rushing numbers in the earlier meeting are less likely to be repeated, and whatever they manage will be divided between multiple players. Their best running backs in the postseason, Clyde Edwards-Helaire and Jerick McKinnon, didn't even play at Cincinnati. It will be a committee, in which either one could finish with the best overall production. McKinnon was the star of win over Pittsburgh, running for 61 yards and catching all 6 passes thrown his way for 81 yards and a score. He has fresh legs after barely playing much during the season. But the Steelers had the league's worst run defense at the end of the year; McKinnon wasn't effective against Buffalo last week (10 carries, 24 yards). Edwards-Helaire (who missed the Steelers game) was far better, carrying 7 times for 60 yards. McKinnon was more involved as a receiver, catching 5 passes for 54 yards, compared to just 1 for 9 for Edwards-Helaire, and that should continue. The team also has Darrel Williams, who ran for 88 yards and 2 TDs at Cincinnati, but he's missed most of the two playoff games with a toe injury and might now be the No. 3, if he's active at all. Edwards-Helaire for running and McKinnon for receiving; that's what we're expecting this week. Any one of the three, as well as Mahomes, is a possibility for any rushing scores. Difficult to lock in too heavily on any of these backs, especially with at least two of the other three teams still playing likely to feature a single runner.

With the kind of numbers Mahomes has been putting up, Byron Pringle (pictured) and Mecole Hardman look like viable options nowadays. That wasn't the case through the first 14 games, with Pringle averaging just 29 yards with 3 TDs, and Hardman at 36 and 1. But Tyreek Hill and Travis Kelce either missed games or were limited due to COVID down the stretch, helping those other players taking on larger roles, and that's carried over to the playoffs. Pringle especially, catching 24 passes for 232 yards and 5 TDs in his last five games. A modest 46 yards per game, but nearly 5 catches per contest and a third of the touchdowns Mahomes has thrown over that span. Hardman is a step back -- his best game was a 103-yard performance in Week 18, with Hill playing under a quarter of the snaps. In his other four most recent games he averages 38 receiving yards, with 1 TD. But they're using him some on runs; he's carried 5 times for 47 yards in those games, with a touchdown against Buffalo. Potential for both to hit, but Pringle makes the most sense as a Week 21 sleeper at the position.

Hill had a lot of down performances during the season, finishing under 60 yards in half of his 16 full games. But the highs were impressive (11-plus catches four times), and he's now caught 16 passes for 207 yards and 2 TDs in two playoff games. He added a 45-yard punt return last week, so it's possible he'll get some work in that area. He's gone over 100 receiving in four of his last six postseason games. All three wideouts finished between 35-53 yards in the game at Cincinnati, with Hill possibly still recovering from COVID. Demarcus Robinson scored in that game; he's another possible option for those needing to dip deeper at wideout. He caught 4 for 76 in the playoff win over Pittsburgh. But a far riskier choice, having caught just 25 passes during the season -- 1 or none in more than half (nine) of the team's games. He was targeted on just 1 of Mahomes' 44 attempts last week.

Kelce's ceiling is below that of Hill (the tight end had just one game with more than 8 catches), but floors don't get much higher. On the season he's averaging nearly 6 catches per game, and he's scored now in five straight weeks -- 7 total touchdowns in those contests. He caught 5 passes and a touchdown at Cincinnati. The Bengals allowed a better-than-average 15 touchdowns to wide receivers but a worse-than-average 8 to tight ends, making Kelce look even more like the favorite to catch any touchdowns. He and Hill each caught 9 during the season. The other tight ends shouldn't be factors. Noah Gray and Blake Bell have combined to catch 3 passes the last two weeks.

Harrison Butker was an adventure at times the second half of the season. Including the playoffs he's missed 4 field goals and 3 extra points, which isn't terrible, but all but one of those have come since Week 11 (he missed one of each last week). But last week's missed field goal was off the upright from 50, and he nailed the clutch 49-yarder to force overtime. Cincinnati allowed the 2nd-most kicking points of the teams still playing, and Kansas City looks like the week's most likely winner; those teams usually finish with more kicking points.

The Kansas City Defense had just 31 sacks during the season, which is 11 fewer than the other three defenses still playing. But it has far and away the best matchup: Joe Burrow took a league-worst 51 sacks, and has been dropped 11 more times in two postseason games. Cincinnati was a little better than average in turnovers (21), but Kansas City ranked 5th with 29 takeaways. Tyreek Hill had a 45-yard punt return last week, while Mecole Hardman had one of 29 yards in the Week 17 meeting. Touchdowns are rare these days, but Kansas City definitely has the best chance of scoring on one of those plays.