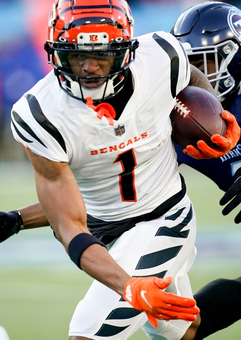 Win or lose, offense should be good

Fantasy Index Weekly is done for the season, but we'll take a look at the remaining three games in detail anyway. First up, the road team in the AFC Championship Game, the Cincinnati Bengals. (Kansas City and the NFC teams will be analyzed here over the next three days.)

Overview: These teams met in Cincinnati three weeks ago, a 34-31 Bengals win. Kansas City led by two scores for most of that one, but Joe Burrow connected with JaMarr Chase on 3 TDs -- including bombs of 72 and 69 yards -- before winning it with a lengthy field goal drive at the end of the game. Offenses were ahead of defenses throughout, and that's probably how this game will go, as well. … Kansas City is favored by 7 points, with an over-under of 54.5, suggesting a 31-24 type of game. … Weather doesn't look like it will be a factor, sunny and 46 degrees on Sunday afternoon. No rain is expected, but there will be a little wind (10-15 mph). Nothing that should bother either offense too much.

Nobody much thinks the Bengals can win this game, but few thought they'd win in Week 17, either, a game that cost Kansas City the No. 1 seed in the AFC. (Not that it matters, with Tennessee losing.) But win or lose, Cincinnati's offense should be fine. It put up 506 total yards and 4 TDs in the earlier meeting, and that was while taking a couple of knees at the goal line in the final seconds. Kansas City's defense was very sound for most of an eight-game winning streak the second half of the season, but not against Cincinnati, and not last week. The Bengals offense has been mildly disappointing while winning its first two playoff games, scoring a total of 45 points in those games -- 3 TDs and 8 field goals. But Kansas City's offense should take Cincinnati out of the luxury of setting for field goals, coaxing higher numbers out of them. Probably 3 TDs and 26-27 points from the Bengals offense this week.

Joe Burrow, certainly, should put up more big numbers. His first two playoff games have been a disappointment fantasy-wise; 2 TDs but just 244 yards against Las Vegas, followed by 348 yards but no touchdowns at Tennessee. But those were against opponents who scrabbled their way to just 16-19 points in those contests, while Kansas City has scored 30-plus in six of seven (and 28 in the other one). Cincinnati won't be able to squeak out a defensive-oriented win by kicking field goals; they're a little more likely to be in catch-up mode against an offense that's scored 42 in each of its playoff games. Kansas City ranked 25th against the pass during the season. We don't dock them too much for getting lit up by Josh Allen, but won't praise them for holding Ben Roethlisberger to 215 yards, either. They might be without safety Tyrann Mathieu, who suffered a concussion early on against Buffalo, although for now we're assuming he'll be available. Pass rush could be a problem: Burrow was sacked a league-most 51 times during the season, and 11 more by the Titans. But he still threw for big yards, plus Kansas City's pass rush was a bottom-5 unit during the season. Burrow threw for 446 yards and 4 TDs against this defense three weeks ago, while taking 4 sacks.

The matchup isn't quite as good for Joe Mixon, but it's not terrible, either. Kansas City ranked 21st against the run during the season, and allowed at least 130 rushing yards four times in its last six games. But some of that production was superfluous (Kansas City won all of those contests), and two of the games were by a Denver team that ran the ball a whole lot better than 23rd-ranked Cincinnati. Mixon carried just 12 times for 46 yards (3.8) in the Week 17 win, with Cincinnati trailing for most of that game. That type of game could play out again, but Mixon will also be a big part of the passing game. He caught 7 passes for 40 yards in the earlier meeting, with a total of 23 receptions for 189 yards and a touchdown in his last four (10 catches in the two playoff games). Samaje Perine might get some of those chances, but Perine caught a single 4-yard pass at Tennessee, while the other ball thrown his way bounced off his hands for an interception -- a slightly off-target throw, but could/should have been caught. In any case, Mixon has been playing about three quarters of the snaps, and should account for most of the rushing and receiving production. Chris Evans will get no more than a couple of carries, should Mixon need a breather. Mixon had 13 of the team's 16 rushing scores during the season, while Kansas City allowed 15, so pretty good chance of a rushing touchdown along the way.

JaMarr Chase gets most of the accolades, but as we've pointed out previously it's a one-two punch at wideout with him and Tee Higgins. The two played 14 games together during the season, and Higgins finished with more yards in half of those. But Chase is clearly the more dangerous receiver, making more splash plays and also the far better scorer. He averaged 18 yards per catch during the season (under 15 for Higgins) and outscored him 13-6. That showed up last week (Higgins caught 2 more passes, but Chase finished with 13 more yards, with a 57-yard reception to set up an early field goal and then a 19-yard grab in the final seconds which led to the game-winner. And of course the earlier meeting, where Higgins caught 3 for 66 while Chase blew up with 11 catches for 266 yards, with 3 TDs. No doubt Kansas City will devote most of its attention to Chase here, and the numbers will be closer, but should be a clear edge for the rookie. Tyler Boyd is a couple of steps back as the No. 3. He caught only 7 fewer passes (74-67) and 1 fewer touchdown (6-5) than Higgins during the season, and had scored in four straight entering the Titans game (including the Week 17 win). But including that game he's caught 4 for 36, 4 for 26 and 2 for 17 in his last three. Kansas City will need to a better job against Chase and Higgins than we're expecting for Boyd to really pay off. Only five teams allowed more touchdowns to wide receivers during the season than Kansas City (19), which has also allowed 6 more in the playoffs -- 4 TDs by Gabriel Davis last week, while focusing on taking away Stefon Diggs. With Chase presumably commanding the most attention, Higgins and Boyd could benefit. But we're not interested in changing the ordering of these receivers based on that game.

For most of the season, C.J. Uzomah wasn't a big part of the passing game. He had a couple of games with 90-plus yards and 2 TDs in the first seven, but reached 40 yards only once in his final nine contests, with no touchdowns. That includes going 4 for 32 in the earlier meeting. But the team has ramped up his usage in the playoffs, with him catching 6-7 balls for 64-71 yards, with a touchdown, the last two weeks. Doubtless the 2nd-most productive tight end in this game, of course, but comparable to the NFC players at the position, particularly in PPR formats.

In a league where kickers don't get a ton of respect these days, fifth-rounder Evan McPherson has made a strong case for valuing the position more highly. He's kicked 4 field goals in each of the two playoff games (most notably a 54-yarder and then a 52-yard game winner at Tennessee), and his lone miss in the last five games was from 50 in an easy win over Baltimore. Most likely he'll come back to earth here, with Kansas City's offense tending to force teams to push for touchdowns rather than field goals. During the season Kansas City allowed just 20 three-pointers, fewer than any team but Green Bay. McPherson bucked those odds in the earlier meeting, with 10 points (2 field goals and 4 extra points), but Kansas City's defense has played to form in two playoff games, allowing 7 extra points and 0 field goal attempts.

The Cincinnati Defense looks like a distant 4th-best choice of the remaining defenses. Its numbers are fine (42 sacks, which ranked 11th during the season, and 21 takeaways, which was average), but it has by far the worst matchup. Patrick Mahomes took only 28 sacks while throwing 13 interceptions, and even those numbers are pumped up by Kansas City's early-season struggles. Including the playoffs, Mahomes has thrown just 4 interceptions in his last 11 games, and he's also taken just 17 sacks in those contests. The Bengals didn't have any sacks or takeaways in the Week 17 meeting. They don't have a noteworthy kick returner at present, either.