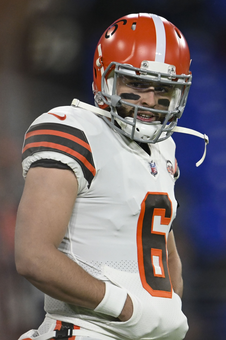 Baker Mayfield, by all accounts, is done in Cleveland. He posted what felt like a goodbye on social media last night, with the Browns moving to potentially land Deshaun Watson. Even if those attempts fall short, the team seems like it will be moving onto to a new quarterback.

Things are up in the air for now, but it seems like Mayfield will be with a new team before long – maybe as a starter, maybe as a backup. He’s signed through 2022 at $18.8 million guaranteed. Some team probably will be interested in taking a one-year flyer on him at that price tag.

If this saves us having to watch anymore of Mayfield’s Progressive commercials, I consider it to be a good thing. (Has any NFL player ever gotten more off-field endorsements with less on-field production?)

Reclamation project quarterbacks have been a theme recently, with the Steelers signing Mitchell Trubisky and the Commanders trading for Carson Wentz. Jameis Winston and Marcus Mariota are on the market, looking for jobs, and Mayfield can now be tossed into that mix.

It’s an arena where there’s a lot more misses than hits. Most recently, Wentz didn’t work out for the Colts and Sam Darnold went down in flames for the Panthers. Jared Goff went to Detroit last year, and that one perhaps can be called a wash. Goff is never going to develop into an average starting quarterback, but he arguably was about as good as could be expected last year for the Lions.

Below is a list of quarterbacks selected in the first round in the 32-team era. I won’t call them busts (Wentz and Goff helped their teams to Super Bowls, for example, while Blake Bortles had a season with 35 TD passes). But with all of these quarterbacks, for various reasons, they got to the point where the team regretted the selection and wanted to move on, trading, releasing or not re-signing them. And the list below shows how those quarterbacks fared the next season.

I don’t see many hits, either short- or long-term. Of these guys, only two posted top-20 fantasy stats in their first season on their second team. (Both Jay Cutler and Wentz ranked 14th among quarterbacks using standard scoring). Cutler got to an NFC Championship game, but I don’t think the Bears look back fondly on trading two first-round picks for him. (Cutler is a little different than most on this list, having had more success with his first team.)

The Steelers are among the biggest believers in the value of handing out second chances. In the last four years, they’ve signed Paxton Lynch, Dwayne Haskins and now Trubisky. Further back, they signed Todd Blackledge and had some success with Tommy Maddox. But the big picture indicates that it’s rare for a quarterback to fail with his original team, then later become the great quarterback that everyone was hoping for at the time he was drafted.

Unlikely, I think, that Trubisky somehow turns things around in Pittsburgh. And unlikely that Mayfield ever progresses beyond being a lesser starter.