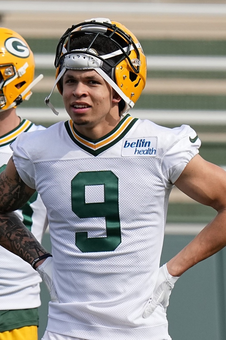 I think I’ve got an idea of the plan for Christian Watson, and I think it was kind of confirmed by executive Brian Gutekunst at a press conference at their spring workouts. At least for now, their rookie receiver isn’t a replacement for Davante Adams but instead for Marquez Valdes-Scantling.

Watson has a body type and playing style that’s really similar to Valdes-Scantling. So it would make a lot of sense to use him in a similar kind of role, lining him up outside and letting him run a limited number of routes. He could be their primary deep threat; those are plays that don’t require intricate timing and execution. Instead, it’s more about being big and fast.

“The speed and the size jump off the tape,” Gutekunst said. “That’s certainly going to give us something to take the top off the defense. With MVS leaving in free agency, that will replace that I think initially.”

The combine numbers for these guys are eerily similar. They’re both 6-foot-4, and they both are within a pound of 207. MVS ran a 4.37, while Watson ran a 4.36. They both have 10-inch hands and 32-inch arms. So reasonable to think Watson can step on the field pretty much immediately and do the same kind of things. Valdes-Scantling, by the way, played extensively in his rookie season.

These are not, however, carbon copies. Watson is more athletic. At the combine, his vertical was 8-inches higher, and he went 12 inches farther on the broad jump. The Packers drafted him four rounds earlier.

With the additional upside, there’s the potential that Watson eventually will grow into more of an Adams or Jordy Nelson kind of guy. I don’t think it will be surprising at all if he outperforms most of the receivers selected in the first round.

But for now I think Watson is looking a lot like Valdes-Scantling. So statistical expectations for 2022, I think, should be pretty modest. Below see the MVS body of work under Matt LaFleur. There have been 27 games in the last three years where MVS has been on the field in what you would call a starting, regular role (on the field for at least 65 percent of their plays). In those 27 games, he’s caught 65 passes for 1,176 yards and 8 TDs, averaging 18 yards per reception.

If we look at the last 17 such games (a season’s worth of work), it shows 38 catches for 811 yards and 7 TDs. If you select Watson, I think that’s probably what you can realistically hope for in 2022.

Valdes-Scantling was a fifth-round pick in 2018. He played one year before LaFleur got there, and with a couple of decent games. But for our purposes here, I think it is more relevant to look at the three years MVS spent playing for LaFleur – to get a feel for that role in the offense.