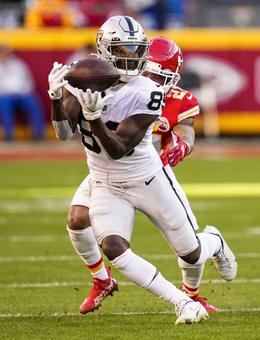 Jarvis Landry signing with the Saints was bigger news from a fantasy perspective, but I'm intrigued by the Raiders trading Bryan Edwards to another NFC South team, Atlanta. There was a time when Edwards looked like a nice sleeper with Las Vegas, and maybe that can happen in Atlanta.

The new Atlanta quarterback, Marcus Mariota, will recognize Edwards around the locker room; that's a plus. And the Falcons, with Calvin Ridley suspended and Russell Gage departed, have a desperate need for functional wide receivers. They drafted Drake London in the first round, but there might be a learning curve for the rookie, plus he's just one guy. The depth chart is wide open after that.

A couple of preseasons ago, it was reasonable to wonder if third-rounder Edwards would turn out better than first-rounder Henry Ruggs. That was before Ruggs' legal problems which now make that speculation a moot point. But Edwards looked like he was going to be a nice selection, and he's shown some good things with his opportunities the first two seasons.

Most notably, Edwards in his first two seasons has shown some big-play potential. He's averaged 17 yards per catch, and 10.3 yards per target. Among all wide receivers to catch at least 40 passes the last two years, that's a top-10 figure. Data from pro-football-reference.com was used in compiling this table.

Sharp eyes will notice Ruggs at the top of this chart; getting receivers downfield is clearly something the Las Vegas offense has wanted to do. Nelson Agholor also shows up on the list; he averaged nearly 11 yards per target with the Raiders in 2020. But there's some potential for Edwards, in a new offense without much at wide receiver.

Edwards' last games with the Raiders were among his better ones. He led the team with 4 receptions for 63 yards in the Week 18 win over the Chargers, putting the Raiders into the postseason, then came back to catch 3 for 41 in ensuing loss to Cincinnati. But he was going to be pushed down the depth chart following the acquisition of Davante Adams. Now he's got a better chance to emerge as one of the top 2 wideouts. There are worse last-round sleepers.

A brief comment on the Saints' signing of Jarvis Landry. The initial reaction was that it cooled the outlook for first-rounder Chris Olave, giving the Saints a couple of proven, veteran wideouts ahead of the rookie. But the immediate second thought was that since Landry is a slot receiver, like Michael Thomas, it's a concern for Thomas' recovery from the world's longest ankle injury.

Just last week, Head Coach Dennis Allen said "There's still a few hurdles that [Thomas] has got to climb, with any of our guys that had any injuries they're trying to get back from." Thomas has appeared in seven games the last two seasons; none last year. He's still recovering. The fact that he's still facing hurdles 18 months after last appearing in a game is not encouraging. I don't think I'd touch him in a draft until get something more positive than what we've seen so far, and the Landry signing just strengthens that worry.