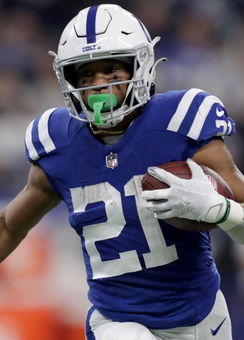 Reich says Colts will have a 2nd good back

Frank Reich indicates that he thinks Nyheim Hines is going to have a big year. He’s even advising fantasy team owners to select him onto their teams.

The Colts bogged down offensively last year, heavily emphasizing the run. (And with Jonathan Taylor ripping off 100-yard games, why not?) But Hines caught 63 passes two years ago when they had Philip Rivers at quarterback, and there’s been talk about getting that element back in the offense.

“I think that last year, as we’ve documented well, we got probably a tad more run-centric than we wanted to be, than I wanted us to be,” Reich says. “Just worked out the way the dynamics were. Nyheim still made an impact in games but not as much as normal and if you look at his years here, it’s been like every other year where he seems to have a better year.”

Then came the part that us fantasy geeks will like …

I think there’s some sense in selecting Hines as a depth running back in a PPR format. In fact, I’ve selected one team so far, and he’s on it. (I think I had him as “worth” $16 in the auction for the magazine and was able to get him for $8, which is the kind of buy I’m looking for in that style of format).

I don’t think Hines will be a difference-maker. He’s not going to be one of the top-20 running backs, but he’ll probably be healthy for all 17 games and will always be available as a starter-type option. Should end up being a top-30 producer.

In a PPR format, I tend to have value in third-down backs as depth running back guys.

Below is the list of all running backs in the last 10 years who’ve run for fewer than 500 yards but who have caught more than 50 passes. You see the run stats, the catch stats, and then the overall PPR and rank at the position. Some may feel that 500 rushing yards is too high of a threshold, given that Hines hasn’t run much. So for the guys who ran for 400-499 yards, I’ve got them tagged with black dots.

Regardless, when you pick Hines, I think you’re getting one of those kind of guys.