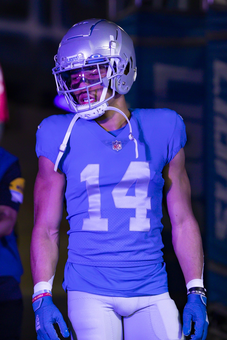 Ian Allan answers your fantasy football questions. How, in the math of a keeper league, James Conner is a better choice than Najee Harris -- and Amon-Ra St. Brown is better than Kyle Pitts. Teams with extra home games.

I am in a PPR keeper league and I have a decision to make between these four: Pitts (4th round), Lamb (4th), Elijah Moore (12th), Amon-Ra St. Brown (15th). I most likely won't be keeping the player beyond this season. If I had to decide today, I am down to Pitts vs. Lamb and I would slightly lean Lamb because the new QB situation in ATL scares me; but I also love having a set-it-and-forget-it TE. Who would you keep?

Pitts and Lamb are the best players, but I don’t know if the value is good enough. Fourth round. That’s pick 31-40 in a 10-team league, or 37-48 in a 12-team format. (I understand this league also uses two quarterbacks.) If teams didn’t protect anyone, how much earlier do you think those players would go? I’m not a big fan of Amon-Ra St. Brown; I think he won’t be as busy with T.J. Hockenson healthy again and other receivers factoring in. But St. Brown looks like the best “value” of your options. I would guess that when the draft is over, the combination of a fourth-round pick plus St. Brown in the 15th round will generate more production than either Pitts or Lamb plus whatever afterthought player you would select in the 15th.

Two excellent choices. After that game Davis had in Arrowhead in January, I wouldn’t be able to toss him back into the player pool at the low cost of an eighth-rounder.

In the magazine it states the Cowboys will play an extra game at home because it is an even-numbered year. What determines what team gets the extra home game?

In 2021, all AFC teams played nine games at home (with eight on the road). The NFC teams were the opposite. It flips this year, and I assume it will continue to toggle back and forth for as long as the league sticks with 17 games. Having all teams in each conference play the same number of home games makes the playoff races more equitable. You wouldn’t, for example, want the Cowboys playing nine home games, while the other two teams they’re battling with for the last playoff spot playing only eight.

When the Index arrives, it marks the official start of draft prep season, and I've been using you since 1997 -- the best in the biz! So my league of record (12 teams) is going to PPR this year. You can keep one player in the round he was drafted last year. My choices: Najee Harris in the 1st, Javonte Williams (5th) or James Conner (9th)? Looking forward to another great season!

Thanks for the kind words. Najee Harris is the best player, but you’re looking for the best “value”. That’s James Conner. I think he’s going to be a top-10 player at his position – better than Williams and within striking distance of Harris – and you would be getting him at the cost of just a ninth-round pick. I would think the strategy would be to protect him, then overpay in the later rounds to ensure you land the backup behind him. They drafted Keontay Ingram and signed Darrel Williams, but there have been multiple stories in recent weeks suggesting Eno Benjamin is looking like the most improved offensive player on that team. Right now, I’m expecting Benjamin will be their backup. Conner has missed multiple games every year he’s been in the league, so if he’s your keeper, you should probably prioritize landing Benjamin as an insurance policy.