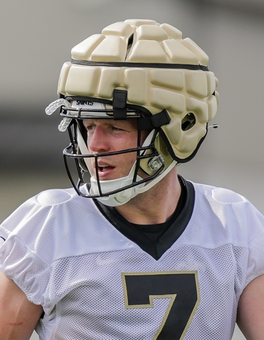 Ian Allan answers your fantasy football questions. In this edition: Handling Taysom Hill's multiple positions. Second-year receivers who'll break out. Will Breece Hall be a full-time back? And more.

RTsports.com defines Taysom Hill as a TE. What if he ends up playing QB? This would be huge, and I am not sure why a trusted site would do this? I have drafted on this site for many years but this seems like a major story if Hill plays QB but can be started as a tight end. I would hope this is not what it looks like or could turn out to be.

Early in the offseason, Dennis Allen said Hill would be a tight end, and that his days of being a multi-purpose utility player were over. I would guess that Real Time Sports at that time designated him as a tight end. (He is also listed as a tight end by MyFantasyLeague.com). But a couple of months later, Allen reversed course on Hill, indicating that he would again be used as a Swiss army knife option. The team has Hill listed as a quarterback on its roster now (both at the team’s website and in the 2022 version of the NFL Record & Fact Book. So there is some potential, it seems, that Hill will start some games at quarterback at some point. I’m not saying it happens anytime soon. The Saints signed Andy Dalton, and I think he’s starting at QB before Hill. But if Jameis Winston is as bad as I’m expecting, that lineup might be changing a number of times. It’s a scenario that commissioners would be wise to mention to their league owners in August, clarifying how Hill will be classified should he start playing full-time as a quarterback. If all owners have been properly briefed, whatever rule you decide on by definition will be fair. I got in touch with both Real Time and MyFantasyLeague, by the way, and they say the positional designation with Hill won’t change. He’ll be a tight end on their sites for the 2022 season. I remember discussing a similar issue a year or two back, and the policy was that once a position has been decided, it doesn’t change during the season (feeling being it would be unfair to those who had already drafted him). Commissioners on both sites, I believe, have the ability to alter positions for players.

I’m seeing a bunch of chatter about second-year wide receivers being the breakout players that should be targeted in drafts. Based on your analysis, and the ADP for second-year receivers, who are the top 3 you’d be targeting in redraft this year?

What is a “breakout” season? If we define a breakout season for a wide receiver as the first year that the player finishes with top-30 numbers, then rookies have been just as good as second-year players. In the last 10 years, 26 rookies have finished with top-30 PPR numbers. And the exact same number of receivers (26) have had their first top-30 season in their second year. So I’m not signing off on the general premise that we should all be looking to build rosters filled with lots of 2021 wide receivers. (The number drops to 14, by the way, for third-year receivers, and just 6-8 for guys in the fourth, fifth or sixth year.)

But you asked specifically for some names of 2021 receivers, and I will give you a few. Not JaMarr Chase, Jaylen Waddle, Amon-Ra St. Brown or Devonta Smith, because they all made the top 30 last year (the “breakout” already happened). I like Rashod Bateman and Kadarius Toney the most. I think they’ll be the best receivers on their respective teams. Toney has already shown he can do it (albeit briefly). With Bateman, he’s all they have in Baltimore. There are some others with some potential, but they don’t look like top-30 candidates to me: Elijah Moore, Rondale Moore, Josh Palmer, Amari Rodgers, Nico Collins and Terrace Marshall.

Do you have a strong opinion/prediction on what the timeshare will look like between Breece Hall and Michael Carter? I thought Carter showed some nice promise last year, especially with pass catching, and was looking forward to getting him at value again this season. Now comes the more talented Hall who is supposed to get the bulk of the work. Better strategy to spend higher draft capital on Hall or wait to get more value with Carter?

I don’t think they’ll simply kick Carter to curb, asking Hall to carry a workload on par with Najee Harris, Jonathan Taylor or Joe Mixon. I’m expecting more of a one-two punch, especially early in the season. I think Hall will start, but that Carter will see some carries and series off the bench. With the complexities of the passing game, I would think Carter will be on the field more often than Hall in those situations.

Strategy question. Comparing your rankings vs. the typical current ADP, value shows up in the RB and QB positions while relative value is more difficult to find at the WR and TE positions. From a strategy standpoint, I am trying to decide when to force a WR/TE pick at "value" just to fill a positional need. Since the deep value tends to show up later in the draft, my inclination is to use early picks on WR and TE and try for RB and QB deals in mid to late rounds. I have the first pick and this even raises the question of taking Kupp over Taylor. Do you have any thoughts on draft strategy in this context? (That first pick is the reward of last year’s championship thanks to your work. Been reading you since the mid 90s. Lots of trophies!)

Hmm. I thought it was the opposite. I finished a draft about a week ago, and in that one, things just never aligned for me to select a running back in the early rounds. I was picking late in the first round, steering me to JaMarr Chase and Travis Kelce with my first two. Going the best-available route, three of the next four (picks 33 thru 64) were wide receivers, with Joe Burrow in there. I finally picked Rashaad Penny in the seventh round (pick No. 81), and I think that’s probably the latest anyone in the 30 or so years of Fanex has waited to selected their first running back. I took Chase Edmonds in the eighth, but it was a forced pick (there were players at other positions that were higher on my board). Nyheim Hines in the ninth, and he’s a guy who’ll be on a lot of my teams (it’s a PPR format, and I believe he’s going to catch a zillion passes).

Hey Ian, 12 team PPR with 1 keeper in round you drafted in last year. We are in a slow draft for draft position, and I'm on deck to pick. Spots available to me are 1.2, 1.3, 1.11 or 1.12. My keeper options are Najee Harris in the 1st, or James Conner in the 9th. If I take 1.2 or 1.3 and keep Conner, top players at those spots will be either Ekeler, Jefferson or Harris. If I take 1.12 and keep Harris, I'd have him at 1.12 and have the 13th overall pick - your rankings say Josh Allen, Swift, Andrews or S. Diggs would be there (after keepers). Which way would you go, keeping in mind that I have concerns about both the Steeler's offense and Conner's injury history?

I would keep Conner. I think he’s a top-10 back, so getting him in the ninth round represents an awesome value – far better than keep Harris in the first round. As an extra benefit, I think you can obtain the backup behind Conner cheaply. I think it will be Eno Benjamin, and he’s not even being selected in drafts right now. If you were to keep Conner, I would think you could pick up with late-round picks both Darrel Williams and Benjamin (then release one of those guys in mid-September when the No. 2 role became more locked down).

We publish a lot of different rankings. For ones with company’s listed – NFL.com, Yahoo, ESPN, CBS Sports, etc. – the positional blend is that of their most popular or default setting. For our in-house rankings (Standard, PPR, TD-only) we tend to be working under the assumption of 12 teams, with each starting 2 RB, 3 WR and a TE. If you’re adding two flex players (while turning down WR to 2) I would operate under the general assumption that most teams will be starting 2 RB, 4 WR and 1 TE. So demand for WR would go up some.

I’ve played in many PPR leagues with 2 RB, 3 WR, a TE and one flex. I generally assume the flex is a wide receiver in such leagues. For all scoring systems, you can see where we’ve set the value-dictating baselines by looking at the setup in the scoring profile. In that area, open the auction area to access the supply-demand numbers for each position.