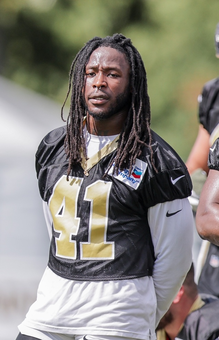 Is Kamara so low cause of the possible suspension? If he doesn’t get suspended where do you see him?

Kamara’s status is key. How long will he be suspended? And will that suspension occur in 2022 or next year? He’ll be in court in late September, but the legal process might not be completed before the end of the NFL season. If the league waits for things to play out in court, Kamara potentially could avoid any 2022 discipline. Or he could be down for six games. He’s been charged with felony assault, and the league’s personal conduct policy states that for such a crime, “a first offense will subject the offender to a baseline suspension without pay of six games, with consideration given to any aggravating or mitigating factors.”

With the potential of Kamara being lost for a month-plus, coupled with me not being high on that offense anyway, I don’t think I’ll be selecting him in any leagues. I’ve got him as about the 20th best running back on the board. When he’s available, I think he’ll be a top-10 guy. (Via my projections, if you take the top 20 backs and look at per-game production, Kamara finishes 10th.)

I saw an interesting stat recently. No running back over the age of 26 has had a top 5 fantasy finish since LeSean McCoy in 2016. Some notable running backs who will be over the age of 26 for this upcoming season include Austin Ekeler, Derrick Henry, Dalvin Cook, Aaron Jones, James Conner, Nick Chubb, Leonard Fournette, Zeke Elliot, and Alvin Kamara. All of these guys except Zeke and Kamara (I think his ADP will shoot up once people realize he most likely won’t be suspended this season) are being selected in the top 24 picks of drafts, meaning you’d expect them to at least have a chance at a top 5 finish. How much weight, if any, would you consider putting into this stat when drafting?

True. It’s a young man’s position. If you’re looking for the gigantic, monster numbers, I think you want to focus on the ascending players. Of the last 25 running backs to finish with top-5 numbers (PPR scoring) none of them were over 26 at the end of the season.

The 2022 rankings and the weekly rankings (once the season starts) are numerical. That is, I decide on a stat projection for each player in all of the different categories (including rushing, passing and receiving yards per game, and rushing, passing and receiving touchdowns per game). Those numbers are multiplied by the expected number of games for each player, producing an overall expected output. You change the scoring system (TD-only, PPR), and the rankings are automatically adjusted. The dynasty rankings are different. Those are done by hand. Each week I scroll up and down the previous week’s version, moving guys up and down by a few spots. Those rankings assume PPR scoring (there is no version for standard or TD-only).

I play in a 10-team keeper league. We lose the draft pick at the round we picked the player in last year's draft. I have the 3rd overall pick this year. I was planning on keeping Jonathan Taylor but lose the 1st round pick so I would only really get a two pick advantage. I know I could get Ekeler or Henry with that 3rd overall pick if I do not keep Taylor. I could chose to keep JK Dobbins or Rashaad Penny and lost my last round pick because neither were drafted last year. Would you not keep Taylor in this situation? And, if so, which of the other two players would you keep to pair up with the new 3rd overall pick. Help is appreciated.

Let’s not get too cute here. It’s a 10-team league, so there will be plenty of good players showing up on the waiver wire before the season is finished. So while guys like Penny and Dobbins have some appeal, the correct course is to keep the special player. Taylor is the No. 1 player on my board. I’ve got him projected to produce 60 more fantasy points than Henry, which dwarfs whatever value you might create by improving your pick in the final round.

For ESPN auction leagues, how would you configure the auction valuation numbers?

It should be set up already. ESPN is one of the options we cover. So you need only go to the custom scoring or rankings area and click on the ESPN option. They are built under the assumption of 10 teams, each selecting 16 players. We’ve figuring on 20 quarterbacks being picked, with 14 going for more than $1 in the auction. 41 running backs, with 30 worth more than $1. 59 wide receivers, with 43 over the min. 20 tight ends, with 12 worth more than $1. And 10 each at kicker and defense, with just 3 and 1 worth more than one. 20 + 41 + 59 + 20 + 10 + 10 = 160 players. If you don’t like the look of the rankings, you can adjust the supply-demand numbers in the scoring profile (it’s in the “auction” area of the profile). If, for example, you thought the quarterbacks are overpriced, you could change the settings from 14 being worth more than $1 to only 10 being worth more than $1. That would make guys like Josh Allen and Patrick Mahomes worth less, and those dollars would show up in the other positions.

Playing in a PPR redraft superflex league for the first time, can you give me some draft advice?

With teams having the ability to start two quarterbacks, they’ll be going early. I recently participated in a superflex league that Draftsharks.com put together. There were 16 quarterbacks chosen in the first three rounds. The only two teams that didn’t select quarterbacks in those rounds each picked a pair of them shortly later. Good quarterbacking (and depth) is a requirement, and I think that’s a good thing. There are eight players in the league with contracts worth at least $150 million. All of them are quarterbacks. So makes sense to me that those guys should be picked early in drafts, rather than being relegated to the later rounds. The Draftsharks league had a couple of other wrinkles that I liked. It gives an extra half point per reception for tight ends, helping out that position. And there’s a second flex spot – one where a team can start another RB, WR or TE (but not another quarterback).

Love all the great options for different scoring systems in the products page. I see you have an FFPC cheatsheet and also see a superflex ppr cheatsheet. FFPC offers some superflex leagues that also use their traditional FFPC scoring with the Tight End position getting 1.5 pts per catch. Could you add a cheatsheet to the list that is Superflex FFPC?

It’s in there. For the FFPC rankings, we’re operating under the assumption that tight ends are getting an extra half point per reception. So if you’re in a non-FFPC rule using that tight end rule, the work-around is to create a new scoring profile, starting by using the pull-down options to set it up as if it’s a FFPC rules. Once you’ve made that initial step, you can adjust the other parameters, if necessary (changing number of teams or players on roster, etc.). While it’s not clearly explained, the tight ends in such a setup will receiver 1.5 points per reception. It’s an off-the-menu option.

I have a relatively high pick (4) in a non ppr. Probably looking at CMC, Harris or Mixon. Are those splitting hairs? Mixon had great numbers and was way more efficient than Harris.

In the drafts I’ve been in, Christian McCaffrey keeps going early. He’s missed most of the last two years, but with that potential to maybe lift a team to a championship, he keeps going early in the first round. He went No. 1 overall in a Draftsharks league on Friday night. I understand the gamble; he’s only 26 and has been a monster previously. But I’m more conservative; I’ve got him behind Harris and Mixon.

Thanks to Fantasy Index, I won my 10 team, PPR, one player after the 5th round keeper league. We use the golf ball approach to drafting and I get only 1 ball in the box so I'm guessing I am drafting 9th or 10th this year. The only top player ahead of me that anyone can carry over due the position he was drafted in is JaMarr Chase. I can keep Deebo Sanders in the 9th or James Conner in the 12th. Can you please give me your thoughts and recommendation?

Deebo Samuel is the better player. We’re all agreed on that point. But Conner is a running back, and that’s a more pivotal position. I’ve got Conner, despite his flaws, a half round higher than Samuel on my board. And in your case, he also comes with a three-round discount.

PPR league. 2-keeper. You lose the draft round where the keeper was selected the previous year. I narrowed the keeper choices to the following 4. Which 2 would you keep? Nick Chubb-RD1, Javonte Williams-RD4, Kyle Pitts-RD5, Jerry Jeudy-RD7

I’m comfortable cutting bait on Chubb. He’s the best of the four, but there would be no need to protect him – he’ll be available in the first round. The decision making is harder with the other three. I started a PPR draft on Monday, and in that one, I’ve got Williams as the 35th player, Jeudy at 48 and Pitts at 70. So it would be the two Denver guys. But let’s see how those three look in the preseason games. Expectations could change.

Can you please recommend a website that hosts best-ball format private leagues? I am having trouble identifying one. Preferably a free site.

I will throw that one out to the readers. Normally I participate into only a couple best-ball leagues each year, and as a participant rather than a commissioner. Real Time Fantasy Sports (RTsports.com) and MyFantasyLeague.com can certainly handle that style of format.