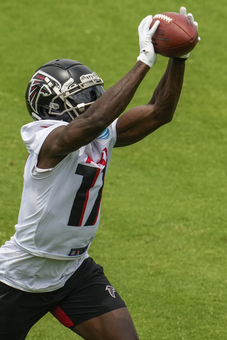 Teams that are lacking pass catchers

It’s a passing league, with the ability to move the ball through the air more important than ever. With that in mind, there are some pretty scary receiving corps around the league – teams that just painfully short in terms of adequate pass catchers.

Colts, Ravens, Browns, Texans and Bears, I think, lead the way. Those are teams where it would make a lot of sense to sign a qualified wide receiver to add some depth.

In the chart below, I’ve removed the leading receiver for each team (using PPR scoring). Then I’m looking at the combined 2021 numbers for the next two wide receivers for each. And it gets pretty spartan for a number of teams.

I am not trying to rank the quality of the receiving corps here. Rookies, for example, don’t factor in. And for some of the teams, they’ve got an additional receiver who projects to be more involved than the two who are listed. And there’s no attempt to point out which teams throw a bunch to their tight ends.

But it’s one way to look at it.

If a player is out for the year, he’s not listed. Most notably, Tim Patrick and Calvin Ridley.

After the top receivers for each team are removed, there are two teams that don’t have another two wide receivers who combined for 30 catches last year: Colts and Commanders. With Washington, it actually looks reasonably decent, having added Jahan Dotson in the first round, and with Curtis Samuel coming back from an injury-plagued season. With Indianapolis, it’s hoping for some help from the player who followed Samuel at Ohio State, Parris Campbell, and second-rounder Alec Pierce.

The Ravens are the only other team finishing under 500 yards, with Devin Duvernay and James Proche right now projecting to be their 2nd- and 3rd-best guys. Rashod Bateman and tight end Mark Andrews should carry that passing offense.

Two of the top 3 teams on the list got there in part by adding players from other teams: Tampa Bay (Russell Gage) and Miami (Tyreek Hill and Cedrick Wilson).

If we’re trying pick teams that won’t have two 30-catch receivers in the upcoming season, I would think the strongest possibilities would include the Falcons (with Olamide Zaccheaus, pictured), Ravens, Browns, Titans and Bears.