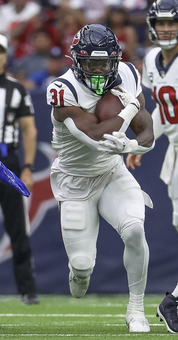 Which Week 1 dud will bounce back?

ASK THE EXPERTS appears weekly from training camp through the Super Bowl with answers to a new question being posted Thursday morning. How the guest experts responded when we asked them: Which Week 1 dud will turn things around the rest of the way?

I'm going to stay patient with Dameon Pierce. It was frustrating to see him out-touched by Rex Burkhead, but neither player was extremely efficient; it's not like Burkhead took the job and ran with it. Pierce is more talented than Burkhead and he's significantly younger; expanded opportunities are likely to come soon as rather than later. Perhaps the Texans just wanted to defer to the veteran for a little bit as they slowly onboard their rookie. You probably can't use Pierce as a fantasy starter right now, but I bet that changes soon.

It happens every year. And even more so for this Week 1 when so many teams played flat and looked rusty. I blame the shortened preseason that no longer prepares a team to play at the highest level, it is solely to determine which players end up on the 53-man roster and avoid getting anyone injured. So Week 1 always contains a lot of players that start slowly, and this year is even worse. The list is long with players like Mike Williams, Allen Robinson, Robert Woods, Matt Stafford, Tom Brady, Rhamondre Stevenson, and so many more. If I had to pick one, I'd probably go with Ezekiel Elliott. The loss of Dak Prescott for 6 to 8 weeks leaves the Cowboys offense reeling and they'll need to stabilize and play to their strengths. Elliott ran for 5.0 yards per carry versus a very tough Buccaneers defense. There's a question about volume since the Cowboys are likely to be trailing in many and maybe most games, but Elliott was far more effective than Tony Pollard.

Chargers wide receiver Mike Williams will rebound with Keenan Allen (hamstring) injured and produce fine numbers the rest of the 2022 season as the new No. 1 wideout. He is simply needed too much in this passing game to fail moving forward.

Mark Andrews wasn’t heroic in Week 1, but his role as the most important tight end outside of Travis Kelce is intact. Andrews led the Ravens in snaps, routes run, and targets.

Aaron Jones wasn’t much of a factor in Week 1. He carried the ball only 5 times. But I don’t think my opinion of him has changed much. He’s going to be a good back (the better half of the Dillon-Jones tandem, I think) and he’s going to be a big part of that offense, both as a runner and catching passes. With the Packers trying to figure out things at wide receiver, in fact, I think Jones will be more involved in the passing game than in previous years. To me, still looks like a good candidate for top-10 running back production in a lot of weeks.

Aaron Rodgers had a disappointing Week 1, but do not despair. The same thing happened last year at New Orleans. Rodgers does not do well on the road in Week 1 these days. Perhaps it was the fact that his two tackles were absent. Both should be back on the field soon to help with the pass protection. Or maybe it was just a lack of chemistry with the new wide receivers. They do play one less preseason game now. That will come with time, probably sooner rather than later so expect a big bounce back. Allen Lazard returns soon and Robert Tonyan displayed flashes of a TE1 so I expect great numbers from Rodgers. Plus he has Chicago at home this week to bounce back on and upcoming games versus the Giants and Jets. What's not to like?

Rumors on the imminent demise of Aaron Rodgers are greatly exaggerated. Deja Vu, Aaron and the Pack got waxed Week 1 last season, 38-3, by New Orleans. What happened next? A collapse? A losing streak? No, just a 7-game win streak on their way to a 13-3 record and yet another NFC North title. Fast-forward to present day, and here we are again. While it appears to many that the sky in Wisconsin is falling, there's 16 more games to go, plus they play the offensively challenged Bears in Green Bay this week, so let's pump the brakes just a bit.

If anyone in my leagues wants to bail on Kyle Pitts (2 catches for 19 yards), I'm here for it. Although it didn't happen for him against New Orleans, he still shared the team lead with 7 targets. Olamide Zaccheaus and KhaDarel Hodge combing to catch 7 balls...that's not happening again, I don't think. They'll get Pitts dialed in and Marcus Mariota will be looking for him. Starting this week.