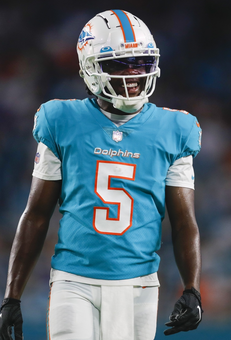 I drafted Russell Wilson as my QB, with Wentz as backup. Our league has a midseason redraft after Week 7 (we keep 5), so hopefully I can get someone better then. The question is how to remain in the hunt over the next 4 weeks. Russell and Wentz are ranked 25th or worse this week in our customized, TD-heavy scoring system. Available QBs include Mayfield, Geno Smith, Brissett, D Jones, D Mills and Cooper Rush. Rush is actually ranked 12th this week, but I’d love to get someone I could live with for a month and not constantly be paying fees to pick up a different QB each week. Suggestions?

How about Touchdown Teddy? I’m not sure when Tua is returning; he’s already been ruled out for Week 5, and I don’t think it’s a lock that he returns in Week 6 or 7. I heard a concussion advocate on a podcast earlier in the week advocating that Bridgewater should be held out for the remainder of the season. If the Dolphins bring him back in Week 6 and he suffers another concussion in that game, what does that look like? I think we’re doing to see Bridgewater for a few games, and I wonder if he might be as good or better than Tagovailoa. There have been some good games down there, but I think it’s more about the speed at wide receiver and the structure of the offense rather than the guy throwing the passes. Bridgewater is a plus-level backup; they signed him to one-year deal worth $6.5 million, all guaranteed. Entering the season, only two teams had higher paid backup quarterbacks: the 49ers (Garoppolo) and Panthers (with the fifth-year option error on Sam Darnold).

Reporters were peppering Sean McVay with Robinson questions this week. He says they’re going to make more of an effort to get him the ball. I heard the same kind of talk prior to the Week 2 game, and Robinson caught a couple of passes on the opening drive, including a 1-yard touchdown. Four catches in that game. So could play for the sympathy production. But I am ready to move on. They’ve got the Cowboys on Sunday, and I think they’ll have all kinds of problems with that defense. Then there’s only one more game before Van Jefferson comes back, giving them yet another player they can look to instead of Robinson. And maybe Odell Beckham shows up in another month or so. If you have one of these flavor of the week receivers on the waiver wire – Josh Reynolds last week and Khalil Shakir for Sunday – I would rather take that short-term value than futilely hope that Robinson somehow turns things around. The Rams could have saved a bunch of money and also been better by just sticking with Robert Woods.

I thought JuJu Smith-Schuster had a chance of being this year's Cooper Kupp due to his talent, new offense, and experience vs. the other WRs in KC. While he's the most targeted receiver not named Kelce, it's not resulting in relevance yet. Do you see him getting going, or is this just what he is? Additionally, on a recent podcast, after a lengthy Justin Eleff sermon about his love for the Dolphins, you mentioned that if one or two things went right, "then they'll really be cookin' with Crisco". Can you explain the etymology of this idiom?

With JuJu, I think that what you see if what you get. He’s a starter and a contributor, but he’s not going to elevate to where he’s a featured piece of the offense. Smith-Schuster is a slower receiver, so I don’t think they’ll be drawing up any plays where they’re trying to get him downfield for long touchdowns. I have seen them attempt multiple such pass attempts to other receivers on the team – MVS, Skyy Moore and Justin Watson. And I don’t think there will be any attempt to consistently isolate JuJu on fade-type routes in the red zone (it seems weird, but I think they like Jody Fortson more on those plays). I don’t sense that Patrick Mahomes is ever coming to line of scrimmage, seeing JuJu single-covered, and saying, “We’re cooking with Crisco now.” That’s a saying a picked up a few years ago from some neighbors we play board games with. I had never heard it. There’s a website that pokes around at the derivation of such sayings, popculturekings.blog. It says the saying comes from the South in various forms, including, “Now you’re cooking with peanut oil” and “Now you’re cooking with gas”. The website speculates that “The only thing that we know is that the phrase works due to the high smoke point of peanut oil and is used in higher temperature cooking.”

I liked your Tuesday piece about Matt Ryan. His season has some parallel vibes to Kurt Warner’s season with the Giants. At least I thought so. I looked up Warner’s fumble numbers from that season and they weren’t bad at all. Not how I remember it. But then I returned to Ryan’s current stats and his fumble numbers from this year don’t total 9, as they should. How are QB fumble numbers counted? Is it a fumble beyond the line of scrimmage but something else behind it?

There are fumbles, and there are lost fumbles. Ryan has fumbled 9 times this year, but only 3 of them have been recovered by the other team. Similarly in 2004, Kurt Warner fumbled 12 times in his nine starts, but only 4 were recovered by the bad guys.

Dynasty TD-dependent league. I have Keenan Allen and he remains out with a bad hamstring with an unknown return. His QB is dealing with an injury as well. Would you cut Allen or keep him? If you cut him, who do you prefer between Jerry Jeudy or Diontae Johnson?

I would take Johnson. He’s proven he can do it; he’s a legit receiver. He finished with more catches, yards and touchdowns than Allen last year, and he’s 4 years younger. The Steelers are switching to Kenny Pickett at quarterback, but that doesn’t worry me. (I think Pickett will be an upgrade over what Pittsburgh has had at quarterback for the last year). You also tossed out the possibility of switching to Jeudy. He’s another 3 years younger. But Jeudy, unlike Johnson and Allen, hasn’t demonstrated yet that he’s going to be a top-20 NFL receiver.

Is it time to drop DJ Moore?

He’s one of the league’s top 20 receivers, I think, but I have no confidence that Baker Mayfield and Ben McAdoo can get that offense to where it needs to be for Moore o put up viable numbers. Robbie Anderson scored a 75-yard touchdown against a blown coverage in Week 1; otherwise the Panthers would be under 200 passing yards in every game. They’ve got the 49ers, Rams and Bucs in their next three, which don’t look promising. After that, two of the next three are against Atlanta, and Moore could be worth tossing into a lineup in those weeks.

Moving forward who do you prefer more in a lineup Lazard or Doubs? Also I guess Geno Smith isn't going to be a total buzz kill for Lockett and Metcalf after all?

Lazard and Doubs are starting to look pretty similar. Lazard has been working in that offense longer, with more history with Aaron Rodgers, but Doubs is starting to get there. The numbers the last two weeks have been pretty similar. Lazard has caught 10 passes for 161 yards and a touchdown in his last two, while Doubs has caught 13 for 120 and 2 TDs (with another near-TD against the Patriots). Christian Watson is the wild card here. He’s way more athletic than either of those guys, but doesn’t know the offense as well. The timing, spacing and decision making is crucial, and I don’t think Watson is anywhere close to those guys mentally right now. But I think they’ll be working in Watson more as they go forward, with him having more ability to get deep for big plays. With Geno, he’s gone for 320-plus and 2 TDs in back-to-back games, but against lesser defenses. Detroit is on pace to allow the most points in league history. I still believe Smith will finish the year with below-average passing numbers. That’s an big upgrade, I will concede, over my previous belief that he would be a bottom-5 passer who would be benched at some point for Drew Lock.

Current RBs include Chubb, Swift/Williams, Mostert, Rachaad White. I've got a guy VERY interested in Chubb that may be willing to trade Mixon and Josh Jacobs both for Chubb. Would you stick with Chubb and ride Chubb/Swift/Mostert? Or would you make the deal and run Mixon, Swift, Jacobs?

I would make the deal. Mixon has struggled thus far, but I think they’ll get some of those running game problems fixed. He’s a more productive pass catcher than Chubb. I think those two can fairly be debated, and if you take the Mixon side, you get Josh Jacobs as a throw-in.