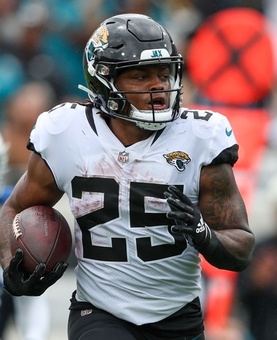 I'm in a standard redraft league and drafted Russell Wilson with high expectations this year (better offensive line was my key reason). Now that Russ got paid he looks like a shell of his former self. I'm considering cutting him for the likes of Goff or even Mariota for my bench (I have Cousins available as my starter). I typically hold on to players too long so am I overreacting? What do you think?

Wilson has been very disappointing. Moving into his mid-30s, it seems like he’s slipped as a runner. He doesn’t move as well, and he’s not as willing to go to that portion of his game. That’s pivotal, with that being a big part of his game. At the height of his powers, he was a Fran Tarkenton type scramblere who would consistently buy time by scrambling around, setting up crushing completions. He’s not doing that anymore. He’s operating mostly from the pocket now, making his height limitations more problematic. And it doesn’t look like the Broncos have a coaching guru who’s going to be able to fix things by re-working the offense. I don’t think Wilson is going to right the ship, re-emerging as a top-10 quarterback in the second half of the season. I am not, however, ready to jettison him for somebody along the lines of Goff or Mariota.

In a keeper leaque I traded Henry for James Robinson. I personally feel Robinson is better now. I also got Darren Waller and a 2nd-round pick and gave up 5th rounder.

Good for you. Super aggressive move. Would have seemed foolhardy a few weeks ago. But Robinson has been the league’s most surprising player so far. Three games in a row he’s scored on a touchdown run of more than 10 yards, and that’s really hard to do. As best I can tell, it’s happened only twice in the last 10 years. Derrick Henry did it in 2019, and David Montgomery pulled it off in 2020.

Which QB has thrown for over 4,000 yards in a season and had the LEAST amount of touchdown passes? I have a feeling it's Derek Carr.

There’s a searchable database at stathead.com (part of the pro-football-reference.com family) that’s perfect for this kind of thing. It indicates that Trent Green in the clubhouse leader (or is it trailer?) with only 17 TD passes from his 4,014 passing yards in 2005. Ten quarterbacks have failed to throw 20 TDs in a season. Of the 10 listed below, three – Carr, Jon Kitna and Matt Ryan – also had a season with just 21 TD passes.

When is the Andre Hopkins coming back?

He’s serving a six-game suspension, so he’s halfway there. And it underscores the importance of the Cardinals’ upcoming games at Carolina and at Seattle. If they can pull out those two (perhaps losing in Week 5 to Philadelphia) they would be 3-3 during his suspension, situating themselves to start putting things together, challenging for a playoff spot. They’ve been pretty lackluster so far on both sides of the ball. The hope is that Hopkins can open up the offense some.

I have Andrews and Kelce at TE. Should I trade one for Dameon Pierce? He’ll throw in Kittle. I’m short at RB.

I’m not opposed to moving one of them, but it would need to be for more than Pierce. With injuries, there are always relevant running backs bubbling to the surface. Most recently, Khalil Herbert and Jamaal Williams for Week 4. If you’re moving one of the two franchise tight ends, you would need to get a better, more proven running back than Pierce in return. (And throwing in a modest, injury prone tight end doesn’t do much to sweeten the spot.)

What do you make of Javonte Williams and Austin Ekeler? We wasted 1st and 2nd round picks on these guys and their coaches seem to be crushing both of them. This whole "sharing the load so everybody is fresh" strategy seems to accomplish nothing but severely limiting your best player's touches. It's unproductive and really speaks to the absolute mind-boggling terrible coaching in the league right now. I could add Aaron Jones to the mix as well as several others. If this continues as a trend we may have the whole first round next year nothing but WRs. Frustrated? Heck yea. Thoughts?

I expect those guys will come around at least some. They’re good players. The Broncos aren’t going to bumble through the entire season scoring one touchdown per week. The Chargers haven’t been able to get their running game going at all, but I would think that might change on Sunday (given the way the Texans have defended the run so far).

How is Jonathan Taylor still ranked so far ahead of every RB? I've watched that team and they don't look good at all.

I’m not giving up on Taylor. He’s a great back, and they’re going to keep feeding him the ball (especially with Matt Ryan struggling). To me, he still looks like the favorite to lead the league in rushing.

Redrafter trade analysis question. 12 team, 20 roster spot PPR league. I have Stafford and Mills at QB (very uninspiring so far). Stacked at WR: Jefferson, Pittman, Higgins, Lazard, Zay Jones, Perkins. 6 pt passing TD league. I sent Pittman to a team for Trevor Lawrence; although on paper it kinda looks like I gave up too much, I feel that starting Stafford or Lawrence based on matchups with Lazard or D. Pierce at flex instead of Pittman will give me a better shot at winning week to week. Do you look at trades this way, or do you analyze them strictly on rest-of-season strength before and after?

I would not have dealt Pittman. He’s going to catch a ton of balls, reliably punching out 5-8 catch games. I think he’s a top-10 receiver, and those guys are really valuable in PPR formats. I would have been inclined to stick with him as a starting receiver, hoping to limp by with Stafford at quarterback. But on the plus side, Lawrence definitely improves your depth at that position, and some chance he just starts outperforming Stafford. I wouldn’t mind sitting down Stafford this week (at San Francisco), though Lawrence also has a lesser matchup (at Philly). P.S.: I like that you just threw a random name into your question (Perkins) making me wonder who you were talking about – probably George Pickens.