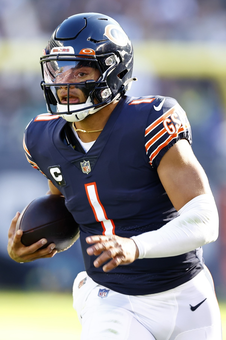 ASK THE EXPERTS appears weekly from training camp through the Super Bowl with answers to a new question being posted Thursday morning. How the guest experts responded when we asked them: Who will be best of the first- and second-year quarterbacks?

Until the past month, I would say NONE of them. That all changed with the rapid recent development of Justin Fields. While he still needs to work on his passing, the team is finally using him correctly on planned quarterback runs. If he continues to develop his passing techniques, he could turn into another Michael Vick!

The 2021 draft class is on course to be one of the biggest busts in modern NFL history. Some dared to compare the Lawrence, Fields, Lance, Wilson, and Jones class to the vaunted 1983 class that gave us three Hall of Famers in Dan Marino, Jim Kelly, and John Elway. Not only is that group failing to live up to lofty expectations, it now looks like none of them will have elite careers. Fields, Lawrence, and Wilson had three of the worst rookie seasons in the modern era. While Lawrence has the "can't miss" pedigree and has played better under Doug Pederson, he's still playing at a league-average (or slightly worse) level. The only one of this half-dozen worth being excited about is Fields. While the others are flatlining or regressing, Fields is steadily improving week in, and week out. He's seeing the field more, trusting his instincts as a runner, and the Bears coaches are slowly letting him throw more. Fields is the only right answer to this question.

During preseason, I was asked about the young quarterbacks for just this season. Justin Fields was my answer then, but I was in the minority to be sure. Fast-forward to present day and he is still my choice -- although now everybody knows it. I saw every game Fields played at The Ohio State University, plus all of his televised workouts in the spring before the Draft. Many OSU players, especially their receivers and defensive backs, have excelled in the NFL. Buckeye quarterbacks have had only had a modest impact in the pros, but I think that we were just treated to J-Roc's coming out party.

This would be the question after Justin Fields runs for 178 yards! None of these jump out (yet) like Patrick Mahomes or Kyler Murray or Joe Burrow, etc. So the jury should still be out on all of them. I'd like to say Trey Lance in a great offense but we've just not seen enough of him to know. Fields has improved lately to be sure. At this moment in time, it is a coin flip between Fields and Lawrence who just needs better weapons but is also improving. I guess for now I would say Fields who will always get valuable rushing yards, but I'd probably end up regretting not taking Lawrence who wouldn't be as open to injury and is a better passer.

Process of elimination. I feel like we've seen enough out of Zach Wilson to say he's got a pretty low ceiling; at best he'll be decent. And it may not be fair, given the injuries, but it sure looks like the 49ers whiffed on giving up so much for Trey Lance. Mac Jones has at no point looked any better than Bailey Zappe did. Unfortunately, it doesn't look like Kenny Pickett will be the next Ben Roethlisberger. So we're left with Justin Fields and Trevor Lawrence. It may be stubbornness on my part, but I haven't given up on Lawrence developing into the superstar he was supposed to be. Maybe the next Peyton Manning isn't happening. But I still believe he'll be the better passer, and franchise quarterback, than Fields.