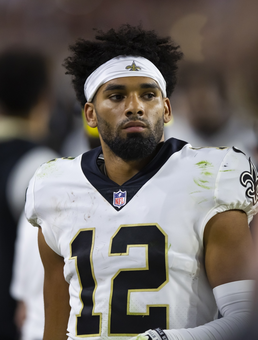 Which rookie wideout will have the best career?

ASK THE EXPERTS appears weekly from training camp through the Super Bowl with answers to a new question being posted Thursday morning. How the guest experts responded when we asked them: Which rookie wideout will have the best career?

Chris Olave was my top-ranked receiver coming into the NFL draft in April, and he remains my choice as the best player in what's shaping up to be an all-time great receiving class. Olave currently sits at WR18 in PPR scoring despite the Saints offense disappointing overall. Olave came into the league a pristine route runner and has adapted to Pete Carmichael's complex offense quickly. Imagine what he can do once the Saints settle their untenable quarterback situation.

This is a very good class, almost half should be in the conversation. Injuries have hampered some of them, so I'll classify them as promising, but incomplete. My top 2 picks are from Receiver U, Chris Olave and Garrett Wilson. Coach Brian Hartline of The Ohio State University has elevated the receiving corps with high quality and positional depth during his tenure. First-rounders Olave and Wilson seem to be on the right pro teams where they can swiftly ascend to elite status. They're already the No. 1 or No. 2 wideouts on their teams' depth charts as rookies, and should evolve into fantasy WR1s in a year or two.

The odd thing about those 13 wideouts is that only four are over 200 pounds and Drake London went first at 6-4, 219 as the biggest. That can matter for a long career of catching short, intermediate and long passes. And the jury is still out on several who have more development. I'd bet that the best career comes from Garrett Wilson. I do not like Zach Wilson that much, but Wilson is insanely talented and fast and the Jets will figure out how to get more from Wilson or he will be gone. It's been a good crop already and we have yet to see Jameson Williams who was tremendous at Alabama.

Four would make my list of finalists: Chris Olave, Garrett Wilson, George Pickens and Christian Watson. Olave has put together the best body of work so far. He’s been doing it pretty consistently. I think Wilson is probably just as good, but he’s been hindered by being trapped in a lesser offense. Pickens has made a couple of insane catches; it’s just a matter of them getting that offense going. If Aaron Rodgers is back in Green Bay, I think Watson will finish with the best numbers in 2023.

It's a great question and a difficult one, as so many of the talented wideouts are tied to cloudy quarterback situations. You also have some injury uncertainty -- a healthy Jameson Williams could easily move to the head of the class. I don't think you can go wrong with either Ohio State receiver (much respect, Chris Olave), but I'll lean towards Garrett Wilson, who proved in college he could win both inside and outside, and has a knack for playing bigger than his listed size. And don't forget, it was Wilson's quick development in Columbus that encouraged Williams to transfer to Alabama in the first place.

Chris Olave. He has shown me enough already. He has 45 catches, 658 yards and 2 TDS in a rookie season with Andy Dalton throwing to him! He will have plenty of draft capital if the Saints want to send him somewhere later in his career.

If we're being brutally honest, I suppose Chris Olave is the guy we'd be selecting first in a rookie draft held tomorrow. But Garrett Wilson has been impressive with a similarly lesser (if not worse) situation. And Jameson Williams might still be best -- we knew he probably wouldn't do anything this year. My own sleeper pick is Pittsburgh's George Pickens. No, he hasn't done much yet, unless we're counting spectacular catches. But he has very much looked the part with his limited chances in a limited passing game. and he's a clear top-2 wideout there going forward. I'm not sure Pittsburgh has the quarterback it needs, but it does have the organizational stability and history that suggests it will find it if it doesn't, perhaps sooner than the Saints-Jets-Lions.