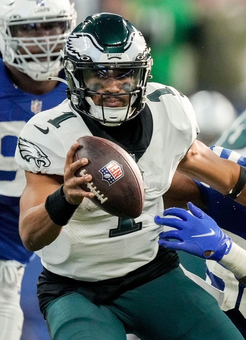 Who are you most thankful for this season?

ASK THE EXPERTS appears weekly from training camp through the Super Bowl with answers to a new question being posted Thursday morning. How the guest experts responded when we asked them: Which player are you most thankful for?

As a lifelong Eagles fan, the answer is easily Jalen Hurts. Not only is he becoming a franchise quarterback before our very eyes, he’s also on a short list for fantasy MVP given his mid-round cost yet elite top-3 production. Quarterback production is at a decade low, yet Hurts is far surpassing preseason projections. As I take a bite of my turkey and stuffing, I’ll be thankful for #1.

I wish I had more of the "right answers" on my teams; I keep scouring my rosters and I can't find Travis Kelce or Geno Smith anywhere. I do have Ken Walker, but only on one team. So my thankful call out will go to Tua Tagovailoa and Tyreek Hill, who I traded for - out of desperation - in September. Tagovailoa had a concussion scare, but he's come back strong. Hill might win the Offensive Player of the Year; he simply cannot be covered (running mate Jaylen Waddle is also a monster). In a season where so many passing games are shipwrecked, Miami has become a destination offense.

As a long-suffering Browns fan, Nick Chubb is the easy answer. Other than last week against Buffalo, Chubb has been racking up yardage as usual, but now he's added TDs. And not only is he a top-3 producer at running back, but he is a 5-star person, personally as well as professionally. During Cleveland's year of massive distraction and underperformance, Chubb has been an incredible example of class. Thank you Nick Chubb, and Happy Thanksgiving to all of Fantasy Index Nation!

I kept drafting Jamaal Williams as my RB3 or RB4 last summer in the hopes that he would still offer fantasy value even when D'Andre Swift cough-bust-cough would be the primary back. Williams leads the NFL with 12 touchdowns and is an every-week stater for me and just scored three times against the Giants on Sunday. He's had five games with at least two touchdowns. I am very thankful for Mr. Williams.

I am thankful for elite quarterbacks. It’s a quarterback-driven game. Those are the guy who make the TV sets turn on. If you’re watching teams quarterbacked by guys like Andy Dalton, Marcus Mariota, Zack Wilson and Baker Mayfield, there’s always going to be a limit on how compelling the contest will be. You want to see those top quarterbacks doing their thing, pulling the strings for the weapons around them. Seems like we have about eight right now who are playing at the highest level. Mahomes, Allen, Herbert, Burrow, Jackson, Brady, Hurts and Tagovailoa. There are other active quarterbacks who’ve been in this group in the past, but I think those eight make up the top tier right now.

Austin Ekeler. Why? He's the No. 1 fantasy running back and do-everything player for fantasy this season!

It's got to be Jalen Hurts, who I drafted late in a 6-point TD pass league, after waiting a bit too long. I knew he'd run a lot, but never did I imagine he'd also throw 15 touchdowns in 10 games, giving him 23 total -- right up there near or with the big guns (Mahomes, Allen, Burrow) all drafted much earlier. I also, and I've talked about this before, need to mention Josh Jacobs, who's been my best running back and was routinely available in the 5th or 6th round. Running backs don't often get paid these days, but he'll have a hot free agent market I think. As an aside, my answer would have been Travis Kelce if I had the foresight to draft him anywhere -- what a monster he's been.