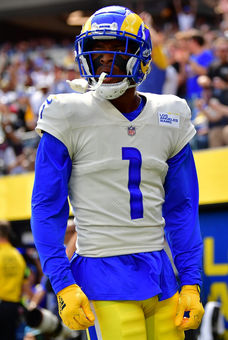 At this point in the year it seems to me it would be more helpful for most to have the Redrafter the point total for the next two weeks and not the 18th week since almost no Fantasy Football is played the last week. Have you thought of providing both? Thanks.

On the Redrafter rankings (Tuesday version), the Week 18 games aren’t factored in much. It’s an elusive endeavor, trying to compile such a product, with everyone having different formats and goals. We all have different goals and priorities. In general, the NFL week starts by making initial sense of each game. You look at each stat for each player, comparing it with his standing, existing projection. Did the player do what he was supposed to do? Or is he now less or more than we believed last week? We’re auditing and confirming all of the numbers and ratios, so that they’re accurate when we post the projections for the next games on Wednesday. We’re resetting the board, so to speak, and that process needs to happen quickly, so that we can get into researching and projecting the 16 games for the week.

Regarding the Allen Robinson conversation from last week: I, too, drafted him and was wildly disappointed (still ended up fine drafting Jefferson, Amon-Ra, and Kelce in order). But Stafford's play is what I'm curious about. Is it possible he just locks on to one target and there's not a lot left over for anyone else? I was hoping you could dig up the #2 receiver numbers from Stafford 's career.

﻿﻿ Clever idea. It seems like some quarterbacks have more of a tendency to lock in on a favorite target. Double teams or coverages be damned, they’re going to their guy. Stafford at times with the Rams has seemed to be one of those guys. But I called up his numbers, and they don’t strongly support that idea. He’s had lots of productive second guys.

In the chart below, I left out 2019; Stafford missed half of that year. And I looked at per-game production rates rather than cumulative stats (to avoid the issue of 16-game players seeming to be better just because they were on the field more). The final column shows where the player ranked among wide receivers who started at least half the season.

Early keeper queston: This season, I rode the Jonathan Taylor train all the way to the bottom (drafting Allen Robinson didn’t help). By loss #9, I switched into keeper mode in an 8-team, 2 QB, 4 WR-TE, 2 RB ppr league. As I look at my roster, there are a number of ways to build with the 3 players I could keep, but I learned this year I could stay competitive in the QB position even after trading Allen and Goff for JaMarr Chase. Here are my choices: (I keep 3, and will have 1st or 2nd pick in draft). T.Lawrence Rd 6, J. Chase Rd 7, Jonathan Taylor Rd 8, T.Burks Rd 10, G. Pickens Rd 10, C. Olave Rd 11. I’m trying to decide between QB, WR, RB- or keeping one or more rookie WR and letting go of RB or QB for the draft. I’ve noticed the teams with 4 top 15 WR are continuously in the playoffs, even when weak in other areas. Thanks for the advice before I close this file until spring.

I would think Chase, Taylor and Olave. Chase and Taylor, those are among the very best as their positions, and you’re getting them for mid-round picks. With Olave, he looks like he might be a top-10 receiver, and you’re getting him with a late-round selection. Lawrence and Pickens look like reasonable enough options, but I don’t think they get the conversation, given your options.

Made a championship game primarily due to my opponents laying a couple eggs. This past week my top 3 picks combined to score 6 points in standard scoring. What do I do with Diggs, Evans and Aaron Jones? Diggs sunk my other team and my kid’s team, Dillon (who I have) looks to have taken over the backfield in GB and Evans looks completely off with Brady. I do have other options at WR but they haven’t been ranked as highly as Evans or Diggs.

I would stay the course with Diggs. I’m not holding Chicago’s Arctic; I would expect him to put up top-10 numbers on Monday night in what I’m thinking will be a shootout. With Jones, you’ll have to check into his health. If it looks like he’s banged up, trying to play hurt, then it’s reasonable to start thinking about other options. (Unfortunately, one of those alternatives is playing tonight – if you want to roll with Hassan Haskins, you’ll need to move now). With Evans, I could go either way. I’m not giving up on him, but if there’s a higher-graded player available, I’m not opposed to plugging somebody else in. Evans is working against a secondary that just lost its best cornerback.

Championship week for me in both leagues. QB decision Rodgers or Minshew, Flex: one of these players needs to sit: Keenan Allen, Watson, Allgeier or Sanders. Based on your rankings it would be Keenan Allen which makes me a bit nervous with his recent production. I would lean Sanders or Allgeier. Thanks for the great service you provide!

Jalen Hurts was on the practice field today. If he’s playing, that makes the decision for you. And I think you would be just fine with Rodgers working against that leaky Minnesota secondary. But if Hurts is out, I would roll with Minshew. I thought he looked just fine last week in Dallas, and Philadelphia’s offense is on a level above Green Bay’s right now. Similarly with your flex position, let’s check on Christian Watson’s hip. He said at the beginning of the week that he’s fine, but he didn’t practice at all on Wednesday. If he remains out, that makes the decision for you. If Watson is 100 percent, I want him playing against that Minnesota secondary. If the Eagles are rolling with Minshew at quarterback, that could put Sanders on the chopping block. In the Dallas game (with no Hurts) Kenneth Gainwell was playing a ton and had a couple of carries inside the 5. I think they like Gainwell a lot more than Sanders as a pass catcher.

No. I still see A.J. Brown as a top-10 receiver candidate. I can put up big numbers regardless who Philadelphia starts at quarterback. And with Wilson, he’s been very good when the Jets start anybody other than Zach Wilson at quarterback. I expect Garrett Wilson to play well on Sunday against the Seahawks.