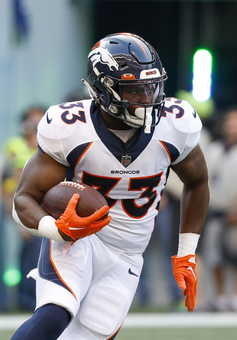 I ask you this same question every year. I play in leagues that keep 12-15 players each year. Which player, probably not on a roster right now, is likely to be a fantasy starter next year? Last year you advised me to add Gabriel Davis.

At quarterback, Kenny Pickett looks like the possible up-and-comer. I could see him becoming a top-15 quarterback. At running back, there are three really good ones who ended the season on IR: Breece Hall, Javonte Williams and Dameon Pierce. They might all put up top-10 numbers next year. A little further down, Rachaad White looks like he’ll probably become the No. 1 back in Tampa. At tight end, I sure liked the way Chigoziem Okonkwo played in the second half of his rookie season. And let’s not forget about Mike Gesicki; he’ll sign with a new team, with the possibility he might be a top-10 player at his position. At wide receiver, there were seven selected in the first 35 picks of the draft, and I think all of them have qualities I like (we haven’t seen much of Jameson Williams yet, but he’ll be fully healthy going into his second year). We haven’t seen much of Calvin Ridley or Rashod Bateman recently, but they could be the most productive receivers on their teams.

I've long believed George Kittle is the most dynamic tight end in the NFL. He's finally being utilized as he should be and he's exploded. Do you think this second half has catapulted Kittle to the top of the tight end position?

I wish he didn’t do the silly thing with his wrist after each catch. It doesn’t seem to fit his brand. On the one hand, it seems like he wants to be a rough-and-tumble throwback kind of guy. So why he is the mixing in the “look at me” stuff? Play the game. Be a pro – be genuine. But whatever, he’s caught 7 of their last 9 touchdowns. He’s on a tear right now.

As far as sustained success, however, there are other tight ends I like a lot more. I’d rather have somebody from an offense with more passing. Even during his recent hot streak, Kittle has finished with fewer than 30 yards in three of his last five games. Compare that to Travis Kelce; Kelce has finished with fewer than 40 yards only twice all year. Durability between those guys isn’t even close. Kelce never gets hurt, while Kittle misses multiple games every year.

2-man keeper league. I know there's a lot that will happen between now and fantasy drafts in August, but I wanted your opinion on who to possibly keep. It's between Davante Adams, Kenneth Walker and Travis Etienne with a heavy lean on Adams already but have trouble deciding between the two RBs. Thank you in advance.

You’re in good hands with those three. Even if something goes sideways with one of them in the offseason, you would still have two good keepers to begin the season with. Adams is the best of the three, but he’s the oldest and plays an easier to fill position (and there’s the question of who’s playing quarterback). When we get to July, you may look at who’s available at wide receiver and conclude that it’s best to keep the two running backs. Etienne wasn’t a great goal-line runner, scoring only 5 of Jacksonville’s 16 rushing touchdowns (Trevor Lawrence ran for just as many touchdowns as Etienne.) Walker had some injury issues as a rookie, but I don’t know that we’re ready to conclude that he’s more prone to injuries than Etienne (who missed all of his rookie year but was remarkably durable as a sophomore).

Have been wondering what the stat differences would be if PI were added to the stat line. What QB? WR? Gets this call the most? What Defense commits the most PI?

I haven’t done much with penalties. There’s a website, “nflpenalties.com” that compiles all of them. According to their numbers, Kansas City in the regular season committed 14 pass interference penalties – 3 more than any other team. The Falcons committed only 1 such penalty all year (3 fewer than anyone else).

Looking into 2023 season I will have the first overall pick in my league. PPR. McCaffrey, Barkley and Alvin Kamara will be available. I have J.Taylor , Prescott, Hopkins and Higgins on my team. I am leaning towards McCaffrey. All three have had injury issues. How would you rank these three RB.

I would select McCaffrey. Kamara isn’t a consideration. There’s still that assault case pending against him, with the league’s personal conduct policy making it look like he’ll be suspended six games of the 2023 season.