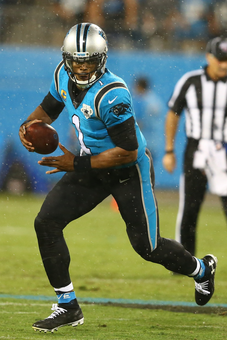 Who should fantasy teams just give up on?

ASK THE EXPERTS appears weekly from training camp through the Super Bowl with answers to a new question being posted Thursday morning. How the guest experts responded when we asked them: Who should fantasy teams just give up on?

So many… So many… I’d have to say all 49ers and Vikings wide receivers (zero reliability). It appears the Cardinals are in that grouping now as well. The 49ers just employ a highly diverse passing attack that doesn’t favor anyone. The Vikings plan to focus on rushing has apparently meant that the passing game is ignored and unusable when it is needed. The Cardinals were going to go through growing pains with a rookie QB, but that offensive line has been as bad as feared and Kyler Murray just doesn’t have time to get the job done.

I dropped Cam Newton in one league over the weekend, and I did it to add an extra handcuff running back (Tony Pollard) despite not owning the corresponding stud (Zeke Elliott), so I guess that looks like giving up. But really there is no answer. If I had an extra roster spot in that league I would still be waiting for Superman’s foot to heal, and the various other disappointments and hard-luck cases around the league could all land on my teams eventually. That was the big lesson of Week 4, no? The same Cleveland Browns everyone was trashing last week now lead the AFC North. Just when we’re sure this league is one thing, it morphs into another.

Obviously Antonio Brown comes to mind instantly. He is droppable in all formats including dynasty as he will never play again in the NFL in my opinion and you cannot afford to waste bench space (no matter how deep) to keep him on the off chance he does someday get his act together. Now moving past the obvious....A.J. Green is my pick. He could prove me wrong and be back around week 7 or 8, or be held out until after the Bengals week 9 bye (back week 10) or.... He is in the last year of his contract and, well, you know what might happen.

I don’t think Cam Newton has any chance of getting back to being a top-10 type quarterback in 2019. I don’t think he’s going to be able to get his foot right to where he’s both healthy and confident being used much as a runner. With defenses not having to worry much about that running ability, I don’t think Newton can put up above-average passing numbers.

When I think of noteworthy players I have given up on this season, Kirk Cousins quickly comes to mind. I must admit though that I am in a quandary as to who is to blame. In the first game of the season he only threw 10 passes, as the coaches wanted to establish the run. Last week he was ravaged by a Bears defense that has been destroying offensive game plans in all four of their games. Whether it's game plans or a lack of talent, one thing is for sure. Right now Cousins is not a viable QB1. Yet, when I see virtually unknown players like Kyle Allen and Gardner Minshew completely outplaying him week after week, I see no alternative but to move on. Even Daniel Jones is a better starting option. When you realize that a player is not performing, you have to accept the new reality and make a move.

It may not be high-profile, but I’ll say Jared Cook. There was a fair amount of good vibes coming from Cook over the summer with the Saints, but he’s done about nothing through one quarter of the season - on pace for 32 receptions and 360 yards, without a single score. He has fewer fantasy points than Oakland’s Foster Moreau for some context. Losing Drew Brees is a tough hit, though Michael Thomas is still the No. 7 receiver on the season. Cook owners could use a good game to maybe re-capture his name value for a trade add-in and move on.

The Falcons are floundering, not flying. Matt Ryan has not been anywhere near elite. As far as the running game, Devonta Freeman, previously a top-10 running back, has been a total bust through 4 games. How low has Freeman sunk? It was Ito Smith, rather than Freeman, who was called upon to vulture a 1-yard TD in the 1st quarter this past week. Granted, it's only been 4 games, but Freeman needs to be benched.

The writing was on the wall for Sony Michel the day the Patriots drafted Damien Harris. He's not the back they were looking for. He's their starter now and will have the occasional decent game or two against terrible opponents like Miami. But I'm continuing to stash Harris on benches under the belief that come November, when they really want to work the run with a featured back, Michel will be either hurt or on the bench and Harris will be their main runner.