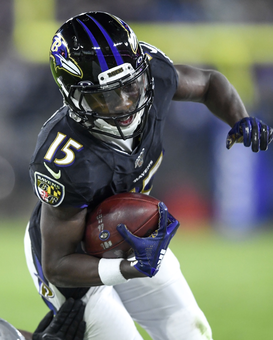 Halfway through the season, I don’t see a rookie wide receiver I’m confident will turn into an elite, top-shelf player. (At the receiver position, that top tier is filled with guys who can be counted on to regularly challenge for 100-plus catches and double-digit touchdowns.) But I do see four that I think will be pretty good.

DK Metcalf, Hollywood Brown, Terry McLaurin and A.J. Brown. Those are my top four, and I don’t see a lot of difference between them.

McLaurin is probably the best of the four, but he’s in the worst situation. Who’s coaching Washington next year? What kind of offense are they running? And how long will it take to mold Dwayne Haskins into an acceptable quarterback? But McLaurin looks great on the field. I saw him torch the Eagles in Week 1, and he caught 5 TDs in his first five games. He was ripping up Xavier Rhodes in Minnesota until Case Keenum got knocked out of that game.

Metcalf is probably the worst of these four, but he’s in the best spot. He’ll be working with Russell Wilson for the foreseeable future. And while Metcalf has some limitations (he’s so big, it limits his quickness) the Seahawks seem to have a good feel for how to use him. He’ll never be a 100-catch guy, but I think they’ll have some success using him as a deep threat. He’s been scoring touchdowns.

Marquise Brown looks like another DeSean Jackson. With insane quickness, he’s going to pop up regularly with long touchdowns. He’s a difference maker. But he’s tiny – the one guy on this list who’s smaller than me – and I think he’ll always have problems staying healthy. And with his style of play and the team he’s on, I don’t think he’ll ever rank in the top 15 in a season in receptions.

I am putting one other player in the top tier – A.J. Brown. I’ve seen him make a few plays where he looks like he’s going to be another Anquan Boldin. He’s huge, he’s strong, he gets it, and I think he’ll be around for years and years. But like McLaurin, we get into wonder how it will all play out. Who’s quarterbacking? And what kind of offense are they running? Is he even going to be the best wide receiver on his own team? They’ve got Corey Davis, but I think Brown will be better.

On the list below, rookies are flagged by black dots. Rankings assume PPR scoring, with fantasy teams holding the rights to players indefinitely – so you’re not just looking at 2019 and 2020 but even future years. So when guys start getting similar in value, the tendency is to go with the 23-year-old before the 28-year-old.

After those initial four, there are another nine rookie receivers worth discussing, I think. Parris Campbell hasn’t done much this year, but he took a nice step forward on Sunday in Pittsburgh. (Outside of tripping over his own feet with the end zone in front of him, that is.) For the first time, Campbell looked like an NFL receiver. I think he’ll be like Curtis Samuel, who played in the same limited role at Ohio State before him. Campbell has the right coaching staff, and he’ll come around. But I can’t rank him higher because I’m not sure if he’s even one of the top 2 prospects on his own NFL team – Colts have T.Y. Hilton (we know he’s great) and Zach Pascal has been coming on nicely.

Diontae Johnson has had a very nice season for a bad passing offense in Pittsburgh. The Steelers have a great track record of developing receivers, and it looks like Johnson will be their latest.

Around 50 receivers in, I would be considering two physical marvels who need development. Mecole Hardman and Deebo Samuel don’t have the know-how yet between the ears, but I think it will happen for them in future seasons.

Darius Slayton has made a few downfield catches for the Giants. He needs to be part of the discussion. And Hunter Renfrow looks like he’s going to be a good slot for the Raiders. Renfrow looks like Walter from accounting, but he seems to be developing into a security blanket type guy for Derek Carr.

In the mid-60s, I have a pair of big prospects who haven’t done much of anything yet. N’Keal Harry and J.J. Arcega-Whiteside are redshirt types who could come on in 2020.

Last guy I’ll include is Preston Williams, who might have been 20 spots higher had he not just blown out his knee.

Each week I look at one position for dynasty purposes. To see other positions (from previous weeks) use the “Past Issues” navigation on the right side of the screen. I posted running backs last week. Next time it will be back to tight ends.