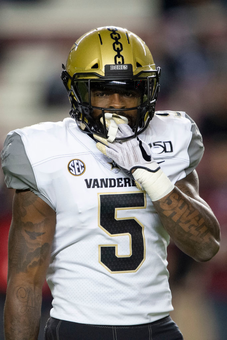 I limited it to running backs drafted in the first three rounds, to make for a more manageable list (and to exclude later picks who sometimes hit as rookies, but aren't expected to). Teams seldom count on fourth- or fifth-round running backs doing big things in their rookie seasons, and fantasy GMs shouldn't either.

Finally, I'm splitting the players in half, since all sub-1,800 yard guys aren't equal. Players who put up 1,700 total yards are a lot more similar to yesterday's group than those who were under 1,000. I'm showing all the numbers, but I'm classifying the "lesser" college performers as the ones who were under 1,300 total yards in their final years of college. That gives us a group of 18 running backs from the past decade, including a pair of 2020 third-rounders (KeShawn Vaughn, pictured, and Antonio Gibson).

Of those previous 16 backs, just under a third (five) put up top-25 (PPR) numbers in their first seasons. That includes 2019 rookie Josh Jacobs (the other 2019 rookie in this group, Damien Harris, barely got on the field). So decent odds for those "lesser" performers in college having significant rookie seasons.

Like yesterday, table shows total yards and touchdowns for each player in their final year of college, followed by rookie numbers and fantasy rank at the position.

Finally, for completeness, here are the other 31 running backs selected in the first three rounds over the last decade, including three 2020 backs (D'Andre Swift, Cam Akers and Darrynton Evans). These are guys who fell a little short of yesterday's group but were over today's -- the 1,300 total yards to 1,799 total yards guys. That includes a couple of last year's rookies, Miles Sanders and David Montgomery. Just under a third (9 of 28) put up top-25 numbers as rookies.

At the risk of giving too much of a blanket statement, it doesn't look like a huge difference between the guys who knocked it out of the park in their final college seasons and the guys who, for one reason or another, but up ordinary or lesser numbers. If you select a rookie running back drafted in the first three rounds in April, looks like about a 1-in-3 chance of that player hitting for you. And although odds are a little better for first-rounders (9 of the 22 top-25 backs in these two posts were drafted in the first round), about 60 percent (13) were drafted in the second or third round.