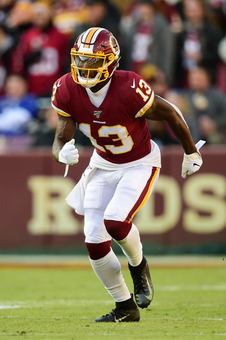 Harmon out for season with torn ACL

Free agent receivers Antonio Brown, Josh Gordon, Demaryius Thomas and Terrelle Pryor are looking for teams. They may want to call Washington; that team just lost a wide receiver who might have been a starter for them.

Kelvin Harmon, per an NFL Network report, is out for the year with a torn ACL.

Harmon was a sixth-round pick last year. He has an impressive build (6-2, 221) and showed some potential as a rookie. He didn’t play much in the first half of the season, but when they started using him more, he averaged over 3 catches per game.

Harmon was on the field for at least two thirds of the offense’s plays in each of the last seven games last year. He caught 22 passes for 290 yards in those weeks (albeit with no touchdowns). In the game-by-game logs below, I’ve put in bold the games where Harmon played in a starting-type role.

Harmon caught 150 passes in his last two seasons at North Carolina State, going over 1,000 yards each year (with 4 and 7 TDs). He’s not a burner, however. He ran only 4.60 at the combine in 2019. Watch his college highlights on YouTube and you’ll see an Anquan Boldin type of receiver. With his size and ability to play physically, you’ll see him make some contested catches, but he’s not running away from anybody. It’s that limited burst that caused him to drop all the way down to the sixth round, despite a productive college career.

A week ago, I saw Harmon as a contender to be a starter for Washington. Terry McLaurin is locked in as a starter and looks very certain to lead that team in receiving production (where I’ve slotted McLaurin, I expect to be choosing him on many of my teams).

With Harmon now removed from consideration, it will be somebody else who’s starting opposite McLaurin. Steven Sims is one possibility. He did some neat stuff as a free agent rookie last year, scoring on a long touchdown run against the Patriots and catching 20 passes and 4 TDs in his last four games. But Sims is tiny (5-10, 176), making me wonder if he might end up in more of a slot role.

They drafted Antonio Gandy-Golden in the fourth round. He looks similar to Harmon –huge (6-4, 223) but with modest speed. He also ran only 4.60 at the combine, and he also caught exactly 150 passes in his final two college seasons. Making the jump up from tiny Liberty, Gandy-Golden likely will need time to adjust to playing against pro cornerbacks.

Washington doesn’t have much else at the position. Cody Latimer is a former second-round pick, but he’s caught only 70 passes in six years. He’s on his third team.

If Washington wants to go the free agent route, there are plenty around who are looking for teams. Brown, Gordon, Thomas and Pryor have all had 1,000-yard seasons. But all definitely have played their best ball, and there have been no reports indicating Washington is interested in any of them.

In my eyes, McLaurin looks like a candidate for top-15 receiving production. I think he’ll last too long in drafts. And Sims looks worthy of a late-round flyer pick.