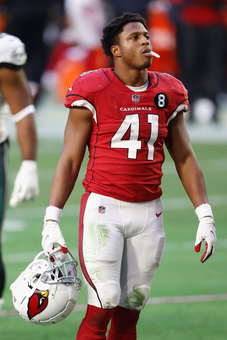 Don't overreact to most recent signings

I wonder if the Packers have any misgivings about the contract they just gave Aaron Jones. Great back and important to get him back, but the running back market hasn't really developed. Seems they could have potentially let him test the market and then brought him back at a lower price. Most of the free agent signings have been No. 2 types.

At this writing, Chris Carson, Leonard Fournette, James Conner and LeVeon Bell are all still on the market -- there hasn't been much talk of an imminent signing with any of those guys. Most commonly, that happens when their asking price is out of whack with what teams are offering. Which with perhaps one notable exception seems to be backup money.

That exception is Kenyan Drake. The Raiders signed him to a 2-year, $11 million contract that could be worth up to $14 million. That's crazy money for a team that already has a pretty good lead back in Josh Jacobs, who just turned 23 last month. It's the latest head-scratcher from a Raiders team that has broken up arguably the best part of its roster, trading away Rodney Hudson, Gabe Jackson (after announcing it would release them) and Trent Brown. It is not, however, a new approach; the Raiders have kicked the tires on other running backs almost the entire time Jacobs has been on the roster. It's perplexing. Bottom line: Drake is making too much money to be a mere change-of-pace and quality backup. He'll play in most passing situations (the area they've never seemed to trust Jacobs in) and probably get a healthy chunk of the carries, at least until one of them inevitably gets hurt. Wherever you slotted Jacobs before this move, he needs to move down a round or two, and Drake becomes a priority add.

Jacksonville signed Carlos Hyde to a two-year, $6 million deal. This may have been concerning for those with James Robinson in dynasty, but it shouldn't be. Jacksonville was always going to have a second viable running back, and now they don't need to rely on the likes of Devine Ozigbo. Hyde is a 30-year-old who's been with five teams (including Jacksonville) since 2018. He's a veteran backup, period.

More concerning, to some, is the Lions signing Jamaal Williams to a two-year deal worth "up to" $7.5 million. In the eyes of some I've seen on Twitter and the like, he's a big threat to the feature back status of D'Andre Swift. I don't get it. Again, the Lions were always going to sign a second viable running back. Williams is that, and he's very capable on third downs, so he'll definitely get at least some of those chances. But that was inevitable. Bottom line is it's likely a deal for about $3M a year to a so-so runner who averaged 4.0 yards per attempt -- more than a yard less than Aaron Jones -- in an offense led by Aaron Rodgers, and clearly nobody in the league viewed him as a starting running back. If Williams' signing causes people to avoid Swift in drafts, good, I'll take him. Not crazy about that Jared Goff-led offense, I grant you, but Williams is a pretty low level threat.

Saw some similar concerns with the Colts re-signing Marlon Mack. He'll take carries away from Jonathan Taylor and Nyheim Hines, goes the fretting. It's a one-year, $2 million deal. To a running back coming back from a torn Achilles. He's not better at anything than Taylor or Hines. And, torn Achilles. This contract seems like a kindness on the part of the Colts to a guy who clearly met a non-existent market. Give me all the Taylor.

I have no strong feelings one way or another about "Phinsider," a Dolphins fan Twitter account. But when the team signed Malcolm Brown to a contract barely above the veteran's minimum, they put out an article stating that "some see this as a sign the team won't draft a running back early." I don't know who these "some" are, but I don't believe they exist. The Brown contract is $1.75 million. He's not better than Myles Gaskin or probably even Salvon Ahmed; not a lock to make the roster. There have been hints Miami will draft a running back early, apparently not fully sold on either Gaskin or Ahmed as lead back. Signing Brown doesn't impact that. At all.

Houston signed Mark Ingram. No one was concerned about this for David Johnson's value since the consensus is that Johnson doesn't have much value. I disagree, I'm content to draft Johnson as a potential fantasy starter. Veteran free agents who sign with Houston this offseason are about a quarter step above being out of the league entirely. They're definitely not choosing to go there unless said choice doesn't exist. Ingram seems unlikely to make the final 53 on what will probably be one of the league's weakest rosters.

So out of all these signings, exactly one -- Drake in Las Vegas -- should have a notable effect on how you value the starter. With there apparently not being big money and starting jobs out there for the other free agents, some of them will doubtless wind up signing with teams that already have starters, and that will be problematic. (Watch Arizona, for instance, add one of them, destroying the value of Chase Edmonds.)

But for now, virtually all of these No. 2s should be viewed as just that: backup running backs in a league where starters get hurt, so teams like to have 2 or 3 viable ones. And that's about it.