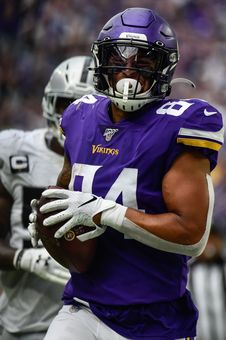 How are leagues handling the extra NFL game? I'm in a 10-team league with two divisions – 13-game season, 3-week playoffs. We've talked about adding a regular season game. This would mean that everybody plays a team from the other division twice. We might also add 2 teams (going to 3 divisions of 4). That would cover a 14-game season. Would love to get input from you and other commenters.

The extra week is deal for 12-team leagues. It allows for the proper 14-week regular season, and then three weeks for playoffs (if you’re taking 6 teams in the playoffs, the championship game would be played in Week 17). In a 10-team league (with two divisions) I would think leagues would use 14-game regular seasons, with teams playing eight games inside the division, the other five teams once each, and then a bonus game against the team that finished in the same place in the standings the previous year. But I’m sure there are readers out there who have cooked up other ideas.

I am in a Dynasty TD-dependent league and have Rob Gronkowski as my TE. He scored 7 TDs. Would you keep him for 2021 or replace him? My other options include Logan Thomas, Irv Smith or Adam Trautman. I can also potentially trade him for Evan Engram. Thoughts?

“TD-dependent”. That’s a key phrase. If we’re talking simply touchdowns, some thought can be given to rolling Gronk out there for another year. As long as he and Brady are healthy, he should be in that same kind of range. But Irv Smith is the guy I would be looking at (especially in leagues that include more than just touchdowns). He came on nicely at the end of last year after they sat down Kyle Rudolph and re-jiggered the offense, with 15 catches and 3 TDs in the final four weeks of the season.

In a keeper League, do you keep D'Andre Swift? I've had Davante Adams, DeAndre Hopkins, Melvin Gordon as rookies, dropped 'em and never seen 'em again. Is Swift of that caliber in your views?

I’m not a Swift fan. He made a few nice plays last year, but he’s being drafted in leagues right now as if he’s a candidate to be a breakout player. I’ve seen him as one of the first 15 running backs chosen. I’m not sure he’ll even be the best running back on his own teams. Anthony Lynn gave an interview last month in which he spoke very highly of Jamaal Williams. The Lions also probably will have Todd Gurley on their roster, and presumably they wouldn’t have been bringing him in for a visit unless they thought he had something left. (I don’t, but perhaps they do.)

Is there a way to look at last year’s regular season stats and determine the fantasy football draft order that SHOULD have occurred in 2020, assuming a certain points system, starting lineup, etc.? At the very least, I would like to know if the argument for T. Kelce with the first overall pick makes any sense at all or if it's just crazy talk. If it can't be justified for 2020, then I can’t see how it could be justified 2021.

Suppose we operate under the assumption that if you didn’t make a position much of a priority, you would end up at some level of production. At quarterback, perhaps the 13th-best guy (Derek Carr last year). He was the best guy who wasn’t one of the 12 guys considered “starters” by the season-ending production. At running back, perhaps the 25th-best back would be that baseline guy (Myles Gaskin, whom you could have picked up off the waiver wire if you’d properly seen how things were headed in Week 1 when Miami was losing at New England). At tight end, the 13th-best guy. And at wide receiver, the 37th-best player (I’m going lower there, because more of them tend to start in leagues – especially flex-type formats). You then go back and subtract out those baseline points from each player. So with the No. 1 overall player (Alvin Kamara) you don’t get his points. You get his points minus Myles Gaskin’s points. If you do that at each position, Travis Kelce ends up as the No. 4 overall player. Where you see the baselines, of course, is key.

Which WR do you like more for 2021, Ridley or Diggs? I like Ridley as a safe top-10 with top 5 upside; Diggs with a much higher risk/reward potential. Could see him dominate again, but potentially coming back to earth and finishing 20th as well.

I won’t be drafting Calvin Ridley. They’ve got a new offense, and I’m expecting they’ll be passing a lot less. Arthur Smith had a couple of really nice wide receivers in Tennessee last year (A.J. Brown and Corey Davis). He didn’t use them much.

What four Div I colleges or universities have won a national championship in Basketball, Football and Baseball?

Sounds good. That would be one to add into the regular rotation. But I will need to look into it. Otherwise somebody like Dennis Lyons will come along and blow it up.

Some say it is to a defense's advantage if its offense is highly capable. This makes sense regarding the number of points it allows because the opposing team cannot score if it is not on the field and the defense is also able to rest. However, if the defense's time on the field it is limited it cannot produce turnovers. This is the rub. One could examine the correlation between a team's offensive production and the number of turnovers its defense produces to empirically investigate this issue. Just a thought.

Why haven't the Jets and Miami done the same as the Pats. Grab a bunch of high mid-level players to surround a couple stars. You keep your spent money low and fill the holes in the team fits for your scheme?

To me, the Jets and Dolphins seem to be making the right moves. They seem to be coming along nicely. I like the coaching staffs. I like the left side of New York’s offensive line, with Becton and Vera-Parker. With each of those teams, the key is being corrected on the quarterbacks they’ve taken with top-5 picks the last two years. Tua Tagovailoa and Zach Wilson. Those guys need to develop into something close to what they were hoping for. At worst, they need to be about as good as Baker Mayfield seems to be (and ideally, they’ll be a little better than that). I’m not ready today to promise that will happen.

I’ve been offered a trade in my dynasty league: J.K. Dobbins for Jonathan Taylor. We get .5 points per reception. Who do you think will have the better dynasty career?

I think most would take Taylor over Dobbins, and I’m with the majority on this one. Dobbins had a nice rookie year, popping a few runs. They’ve got that nice system that will help spring him. But he looks a little small to me. And at least for now, Taylor looks like the better pass catcher of the two.

Ok, I'll say it. Aaron Rodgers will be playing in Pennsylvania this year as an Eagle. Hear me out. Look at what Philly has done during the QB carousel this year. They were in on the Watson sweepstakes. The have J Hurts. Everything else is set. Line, RB, WRs, Defense. The waiting game is what they are playing. Waiting on Watson, and patiently watching for GB to finally say alright, we can't fix this. It's coming. I'm the first. Heard it here.

I like the theory. Both the Broncos and Eagles passed on Justin Fields and Mac Jones. Part of their decision making could involve the value of remaining in the hunt to be a landing spot for one of those two proven franchise quarterbacks.