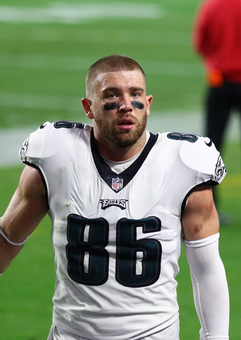 Ian Allan answers your fantasy football questions. In this edition: Is Zach Ertz a sleeper pick at tight end? What happened to Will Fuller? Can the Bengals get Joe Mixon rolling? And more.

There’s lots of speculation over Zach Ertz being traded to the Bills. I have an upcoming dynasty keeper deadline and was wondering how that would change his current outlook.

Ertz has a base salary of $8.5 million. I don’t think the Eagles want to pay that. He’ll be traded or released, I’m pretty certain, and when you see his projection on our board, it’s under the assumption that he’ll almost certainly be elsewhere in September. Maybe Buffalo. Maybe some other team gets a key injury at the tight end position. The Colts have Ertz’s former quarterback and former offensive coordinator. Do the Jets think they’re set at tight with Chris Herndon and Tyler Kroft? Maybe the Saints, who as things stand are hoping for a big step forward from youngster Adam Trautman. If Ertz winds up with any of those teams, he won’t be a top-20 tight end on my board (the Bills pass the ball well, but they have plenty of other pass catchers, and I don’t envision them being interested in connecting on a bunch of short passes underneath to a veteran tight end).

I noticed that Will Fuller is absent from the magazine PPR rankings. Was this an oversight? Or do you not rank him in the top 71 WRs?

I’ve got him as the 3rd-best wide receiver on his own team. Not a huge difference between those guys, but I’m ranking Jaylen Waddle and DeVante Parker higher. Fuller has been very good at times, but he’s been plagued by injuries and now is playing for a team with a passing offense that’s far inferior to what’s been a part of in the past. Fuller is one of the better receivers at getting deep for chunk plays, but Tua Tagovailoa thus far has shown no ability to make those throws. Tagovailoa last year averaged 9.8 yards per completion, next-to-last among quarterbacks who started at least half the season (Ryan Fitzpatrick with the same players around him averaged 1.6 more yards per completion). I don’t expect I’ll be in a draft this year where they’ll be a point where I’m considering whether to select Fuller.

In the magazine, I see that Joe Mixon was drafted with the last pick in the first round of the experts mock draft. Last year he was a consensus first- or second-round pick. I don't get it. I understand Joe Burrow's arrival gives the Bengals at least the hope of respectability, but the offensive line still stinks, and there's no way I'm investing a prime pick on a running back who stands to be on the wrong side of a bunch of 24-6 losses. Setting aside his injury that caused him to miss most of last season, why would anyone count on Mixon to be a fantasy cornerstone when he plays for a franchise run by Mike Brown?

Mixon can be a good back. He’s shown that. He had the monster game against Jacksonville last year, with 180 yards and 3 TDs. The previous year, he was very good in the second half of the season, averaging 102 rushing yards in his final eight games, with 5 TDs. He catches the ball effectively. But it’s hard to have much confidence in the Bengals. They haven’t have much patience sticking with the run, and their offensive line and coaching staff might not be good enough. They’ve ranked 24th and 25th in rushing the last two years. Mixon had the one big game last year, but he averaged only 2.9 yards per attempt in his other five starts. In 2019, he ran for only 320 yards in his first eight games, averaging 3.2 per attempt. To me, it would seem early to be selecting him early in the second round.

I’m not listing any of the running backs I have graded as the top running back prospect on his own team. And I’m not listing some of the good second backs who’ll be starter-type guys even in a reserve role. No Kareem Hunt, for example. I’m focusing instead on players who are either true backups, or on guys where you’re hoping they might get some starts at some point. AJ Dillon would be my top guy. I think he might have some value as a change-of-pace option, and I think it’s pretty certain Aaron Jones will miss at least some games. Tony Pollard, Latavius Murray, Darrel Williams, Darrell Henderson, Chuba Hubbard, Samaje Perine and Rashaad Penny should be good if there’s an injury to the starters ahead of them. Alexander Mattison could be about 10 spots higher, but he’s flopped some with his opportunities the last two years, perhaps playing a role in the Vikings selecting another backup running back in the fourth round in April.

The magazine over the years has been a great tool for identifying some breakout/sleeper quarterbacks. Who is the quarterback going in the QB15 or later range that could make that leap into the top 10? Two QBs that come to mind are Tua and Daniel Jones. Hear me out, I don’t think either of them at this point are good quarterbacks by any means. One of the key factors we’ve seen from these breakout quarterbacks, however, has been a drastic improvement in their situation and pieces around them. Daniel Jones has multiple weapons at his disposal with the addition of Golladay and Toney, and will get Saquon back with a slightly improved OL. Miami did everything in their power to put weapons around Tua, and it’s now up to him to deliver. Could you see either of these guys making that leap this year?

I don’t have either of those guys among my top 20 quarterbacks. Jones has good mobility, which will help him at times, but he doesn’t seem to be quick enough mentally to process what’s going on. He needs to do a better job of recognizing where the ball needs to go and getting it out of his hands. He was sacked on over 9 percent of his pass plays last year, next-to-last among regular starters. Some of that can be attributed to the offensive line, but he’s also played a huge role in those issues. With Tagovailoa, I haven’t seen anything that suggests he’s going to be an average starting quarterback anytime soon. He’s definitely below-average in terms of size, mobility and arm strength, and that’s not going to change. I’ve got Carson Wentz, Trevor Lawrence, Ryan Fitzpatrick and even Sam Darnold ahead of those guys on my board. In a typical 12-team league, I see Tua and Jones as worst-case scenario backup quarterbacks – the guys you might end up with your second quarterback if you don’t get the players you actually want. If you’re looking for a quarterback outside the top 15 who might end up in the top 10, I would be more inclined to consider Hurts, Stafford, Carr, Tannehill, Cousins and Burrow. All of those guys rank between 10th and 15th on my board, but I would guess that at least one of them won’t be among the first 15 quarterbacks chosen in most drafts.

Reading through the magazine (great content as always) and it seems like the FFI team is pretty high on Montgomery and Gibson this year. If you have both of them available in a 1/2 PPR draft, who are you taking?

I have them graded as comparable backs. With both, they’re not what you’re looking for as the best back on your roster, but they’re about as good as you could hope for as your 2nd-best back. In general, they’re both just outside the top 10 at their position. Montgomery is more proven and experienced, while with Gibson, I like the coaching staff more. With Montgomery, I fear there will be some weeks that Matt Nagy abandons the run. With Gibson, I have a lot more confidence that when the ball is inside the 3-yard line they’ll put the ball in his hands reliably.

Any chance of getting your estimates for rush and pass attempts? My major league is a roto one, where that stuff is huge.

The stat projection file is already large and cumbersome, with a zillion columns and rows. So I would be leery of adding even more numbers for something that hardly anyone is interested in. But we can address this issue with an easy work-around. Over the last five years, 156 quarterbacks have started at least half of the games (in any one of those five seasons). Those guys as a group averaged 7.3 yards per attempt. Only 15 percent of those quarterbacks averaged at least 8.0 yards per attempt. So that’s the generally area we’re looking at for the vast majority of quarterbacks. I would figure that for quarterbacks being selected in your league, about 7.5 yards per attempt would work best. That translates to 2.65 pass plays per 20 yards. So we can backdoor that production in with the passing yards. If your league is giving 1 point for every 20 passing yards and 1 point for every pass play, then go to the custom scoring area and plug in that you’re giving 3.65 points for every 20 passing yards. That will be close enough to get you to where you want to be.

And we can do the same kind of thing with rushing. Over the last three years, running backs league-wide have averaged almost 4.4 yards per carry. That works out to about 2.25 rushing attempts for every 10 yards. So in custom scoring, if you’re giving 1 point for every 10 yards and 1 point for each carry, put 3.25 points for every 10 yards in that area in the custom-scoring setup area. This isn’t ideal, but I think it will get you where you want to go. The rankings will be accurate enough that you will be able to move on to deciding whether you want to select A, B or C with that fourth-round pick. That will be a better use of your time then trying to document which running backs are averaging 4.2 per attempt and which ones are averaging 4.5.