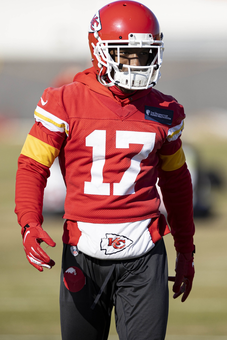 According to the Magazine PPR rankings you are suggesting to draft Hardman over Sutton, Chark and Hollywood? I am having a very hard time with this. In what world does a sane person do this?

We’ve got all of those guys lumped together at the bottom of the top 40 among wide receivers. I don’t see a ton of difference between them. With Hardman, you’re getting less of a track record, but you’re buying into the best passing offense of the four. Kansas City will finish with more passing yards and touchdowns than those other three teams. The question is whether they can develop a decent third option behind Tyreek Hill and Travis Kelce. Sammy Watkins isn’t there anymore, so I expect Hardman will play a lot more, and he looked very good at times as a rookie.

With each of those other three guys, they’ve shown some potential, but I’m not confident that any of the three will even be the best wide receiver on his own team. Sutton’s coming off a torn ACL, and maybe Jerry Jeudy starts playing more like the player most were expecting he’d be when the Broncos selected him in the middle of the first round. Jacksonville is putting in a new offense, and they’ve got some other wide receivers. Marquise Brown is a neat little player, but the Ravens really haven’t shown much ability to tap into his talents. They averaged a league-low 182 passing yards last year.

I am curious about your thoughts regarding tight ends. To me, the top three (barring injury) are monsters, with Andrews probably being close behind. Then there are a bunch of talented TEs who all could put up great numbers or be average. I don't see other steep drop-offs past the 1st round. My opinion is that owners should target these guys heavy. In fact, if I was picking mid second and two were gone, I would take the third.

Travis Kelce has been remarkably steady, finishing as the top-scoring tight end five years in a row. Nobody else at any other position has done that in the Super Bowl era. The only slight concern is that he’s getting a little older (he turns 32 in October). Darren Waller to me looks almost as good, the way they’ve heavily featured him over the last two years. Considering where they’ll be picked, I expect Waller will be a better value than Kelce. George Kittle has the same kind of talent and potential, but with him there needs to be some factoring of injury potential. And San Francisco’s passing game might take a step back if Trey Lance is starting most of the year.

I think there will be some who’ll be jazzed up about Kyle Pitts. He looks like he’ll probably develop into one of those kind of tight ends. But that could take some time. It’s a position where there can be a learning curve. (Of those three other tight ends, for example, none of them were notable players as rookies.) Pitts was more good than awesome in his 2019 season at Florida, catching 54 passes for 649 yards and 5 TDs in 13 games. So I tend to agree with you, thinking I’d probably be more inclined to select Mark Andrews rather than Pitts for the upcoming season.

With tight ends in general, there’s also the tendency for there to be better overall supply-demand dynamics, with fantasy teams typically starting only one (while often starting three wide receivers and two or three running backs). In general, there’s a lot more potential to pull a viable tight end out of thin air in the later rounds, while that’s really tough to pull off at the other positions. That makes it harder to pull the trigger on an elite tight prospect in the first two rounds.

Heading into some year's drafts, it looks to me like not paying up draft capital for one of the top QBs in favor of later drafting 2, maybe even 3 and using best matchups may be the way to go. Has it ever been looked at? If you took QBs ranked maybe #13 and #16 (final cheat sheet rankings) and then started the higher one each week, how did overall point production compare to just having say, #4 QB and starting them all season regardless of matchup? Some years the opposite seemed right to me and it is beneficial to roster overall to have say Patrick Mahomes, where you almost don't even roster a 2nd QB and can utilize the extra roster spot. Thanks for the great work!

To draw meaningful conclusions, you’d need to look at more than a few years and at least dozens of quarterbacks. I don’t have the numbers set up in such a way to make that easily possible. And I’m not sure such a study would create any valuable conclusions. I’m sure there would be some years where it would pay off to go after the elite quarterback prospect, and other years where it would be smarter to toss multiple lines in the water on guys ranked outside the top 10.

Taking a step back from week-to-week use and instead looking at drafting decisions in August, every time you select a player of some value (a quarterback ranked in the teens) there’s a chance something good will happen. And the odds there are better than you might expect. Consider, for example, the top-5 quarterbacks of the last 20 years. Of those 100 quarterbacks (5 each year for 20 years), 43 of them were guys who didn’t rank in the top 10 the previous season. Almost half. And 23 of those 100 quarterbacks were guys who didn’t even rank in the top 20 the previous season. If form holds, there will be a couple of quarterbacks from outside the top 10 this year who finish with top-5 numbers (standard scoring), and one of those guys will be a player who didn’t even rank in the top 20.

With tag teams, keep in mind that there will be weeks that you misfire. There will be weeks where Ryan Tannehill tosses 6 TDs, but you started Matthew Stafford (who got knocked out with a concussion in the second quarter). That’s the nature of the beast. But if you’re operating under the assumption that you can move through the season like Indiana Jones, making the correct key decisions at every turn, then that can be a good way to go. Below see the cumulative stats for the top 20 quarterbacks from last year. I’ve mixed in three quarterback combos. Kirk Cousins and Matt Ryan where the 11th- and 12th-best quarterbacks last year. I combined them, and did the same with Derek Carr and Ben Roethlisberger (13th/14th) and Matthew Stafford and Jared Goff (15th/16th). With the combos, I went with the better producer for each of their games (and I used games rather than weeks to avoid having to deal with the issue of the combos finishing with 17 games).