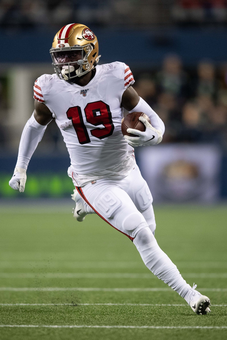 Typically there are a couple of receivers who dramatically outperform where they’re selected. But where do such receivers tend to come from? Are you better hoping for a young player to emerge? Or are the odds better with a veteran trying to come back from an injury?

With this kind of question, it can be useful to look at what’s happened in previous seasons. There’s a lot of data that’s availabe, and that can be useful in pointing us in the right direction.

For this particular question, I looked at all wide receivers in the last 20 years who finished with top-10 numbers (PPR scoring) who didn’t in the previous season finish with top-30 stats. These are the big movers up, and there have been 52 of them in the last 20 years – about two-three per year. Last year there were three, including a rookie (Justin Jefferson) and two veterans coming off injury-hindered seasons (Tyreek Hill, Adam Thielen).

Looking at the 20-year sample, I notice this has been accomplished most commonly by third-year receivers (12 of the 52). Next up would be receivers in their second or fourth year (8 times each). Fifth-year receivers are at 5, rookie receivers at 4, and no other season makes it over 3 times.

The 20-year numbers suggest you’re far more likely to get a big upward-moving season out of a third-year receiver than a rookie. So perhaps relative to where they’re chosen, we should be selecting Deebo Samuel (pictured), Hollywood Brown or Parris Campbell, rather than those coveted rookies like DeVonta Smith, Jaylen Waddle or JaMarr Chase.

Of the 52 wide receivers listed above, 16 of them (almost a third) missed at least a third of the previous season. Most of these guys had injuries; others (Victor Cruz as a rookie) simply weren’t ready to play much. I’ve got these guys tagged with black dots. (Tyreek Hill isn’t tagged because in his injury-marred 2019 season, he at least stepped on the field some in 12 games, which is just above where I set the threshold, but he was also affected by injury issues).

There’s certainly many cases of receivers being able to come back from injuries without losing much of anything. This year’s injury bounce-back candidates include Michael Thomas, Courtland Sutton, Kenny Golladay and Deebo Samuel again. They had injury problems last year, perhaps causing them to be discounted, and that could make them nice values in drafts.

When we’re looking for a receiver to move up into the top 10, the tendency is to zero in on guys who were almost good anyway – perhaps guys who were just outside the top 30. But that’s not strongly supported by the data. Of these 52 breakout-type receivers, only 16 (about a third) put up top-40 numbers the previous season, and only another 4 ranked in the top 50. Over 60 percent of these guys (32 of 52) ranked outside the top 50 in the previous season (8 ranking in the 50s, 10 in the 60s and 9 no higher than 77th – with 5 being players who didn’t play at all in the previous year).

The previous year’s stats shows that we’re not looking primarily for guys who were almost great and then took that final little step. It’s more common for a player to make a big move, climbing way up in the rankings.

Of these 52 receivers, 16 were originally selected in the first round. More (13 and 10) were chosen in the second and third rounds. Only 7 were chosen in the fourth round or later, and 5 weren’t drafted at all. Most commonly, if a player has the traits or ability to be a big-time receiver, some NFL team would have noticed that when he was in college.

In the chart below “PPR” shows where the player ranked statistically among wide receivers that year.