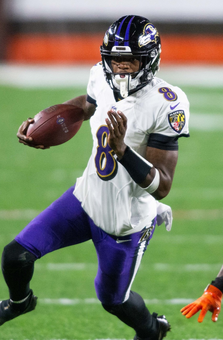 Are games played on Monday nights higher scoring? Sometimes it seems that way, like when the Ravens won 47-42 at Cleveland in December. Or when the Rams beat Kansas City 54-51 back in 2018. Green Bay and Washington were involved in a 48-47 shootout in the ‘80s.

Some players (the theory goes) might be extra motivated knowing that they’re playing on a national stage, with more eyeballs watching – including the league’s other 30 teams.

But is this actually the case? Should we be trying to put players into fantasy lineups because they’re playing on Monday night? The defensive players in these games, of course, are also playing in the same spotlight, so they also in theory would benefit from whatever extra edge is provided from playing on Monday night, whether it’s extra day to prepare or the fear of looking bad on the national stage.

There are many teams playing many games in many years, so it’s a theory that can be tested. There are many stats available, so the impact of the MNF stage can be easily measured.

For this one, best to look only at divisional games. That way, you have an ideal scientific study in place. You’ve got the same two teams with the (mostly) same players and coaches, playing once on Monday night, and once in a regular time slot. Since the league moved to 32 teams in 2002, there have been 131 such matchups. If playing on Monday night creates any kind of extra edge, it should show up in those games.

But it does not. Not at all. In those games, teams scored 14 more points in the games played on Mondays. (That’s in 131 games, so teams averaged 22.18 points in their Monday night games, versus 22.13 in the other games – virtually identical.)

Maybe back in the ‘70s and early ‘80s, when Monday Night Football was new and more of a must-see event, there was some kind of spark for extra fireworks to occur. (I have not looked at those games). But as things stand today, nobody should be starting players in fantasy leagues with the hope of getting some kind of extra push from the Monday night spotlight.

The 131 divisional Monday night games since 2002 appear below. The first two columns show the combined production of the two teams in their Monday night game. The final two show how they performed in their other meeting in that season.

I’ve got the games ordered by points scored in the Monday night game. Interestingly, both the highest and lowest scoring games involve the same two teams. Lamar Jackson (pictured) helped Baltimore win 47-42 at Cleveland last year, and the Ravens also won 16-0 at Cleveland in 2009.