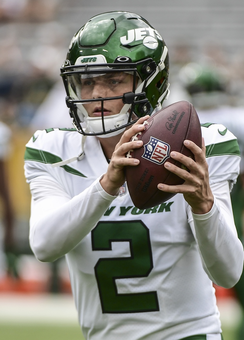 Looking at the league's most improved offenses

The league moved the deadline for final cuts to Tuesday, and that’s been a very good thing for fantasy football purposes. It gives everyone better information for a lot of fantasy drafts.

The weekend before the season starts is the most popular for fantasy drafts, with Friday and Saturday the prime days. Previously, many would draft on those nights, then find out on Sunday afternoon that a few notable players were released. Cam Newton and Nick Folk, for example, got chopped in the final cuts this year.

Now those moves occur midweek, giving everyone plenty of time to digest the 53-man rosters and stack their final boards. Thumbs up from here.

I’ve spent most of the last two days fine-tuning the Fantasy Index rankings, carefully checking each team forecast and the individual rankings, double-checking to make sure everything’s in order. Those revised, finalized rankings should show up in your email inbox shortly (and they can be accessed through the website).

As part of this process, I like looking at team performance in general. With our system, we’ve got the teams and players tied together (so if you add 10 passing yards to a team like the Packers, then those stats flow into the projections for Aaron Rodgers, Davante Adams, Randall Cobb, Robert Tonyan and the rest.

Normally in this weekly check-in, I show the team forecasts in general. This time I’m doing it a little differently. I’m listing those numbers, but I’m also showing the relative change in comparison with how the team performed last year.

With scoring, I’ve got the Jets and Giants as the league’s two most-improved teams. I’ve got each of those offenses moving up from 25 touchdowns to 35.5 touchdowns. The 35.5 TDs come in a 17-week season, so that’s an increase of 25 percent. I’ve got two other offenses improving by over 15 percent – Patriots and Cowboys.

For passing, I’ve got three offenses improving by at least 15 percent – Patriots, Giants, Jets. That’s using standard fantasy scoring (6 for TDs and 1 for every 10 yards).

For rushing production (also using standard scoring), I’ve got the 49ers, Steelers and Texans as the league’s most improved teams. I’ve got five teams declining by over 15 percent in rushing, and they’re all teams that finished with notable rushing production last year (making it easier for their numbers to decline); Saints, Titans, Cardinals, Vikings, Ravens.