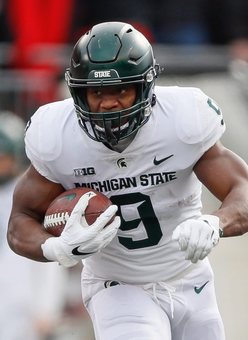 Should teams use early picks on running backs?

“Don’t waste an early pick on a running back.” We hear that one often at this time of year. But is it true? There are, after all, plenty of impact running backs in the league.

Nick Chubb, Dalvin Cook, Jonathan Taylor and Derrick Henry, for example, have been franchise-altering picks, and all were chosen early in the second round. Had any one of those selections been made in the second half of the first round, nobody would be complaining.

You can cherry-pick good running backs who were selected in later rounds (James Robinson, for example, wasn’t drafted at all) but that’s true at every position. Tom Brady, for example, was a sixth-round pick, but nobody is suggesting that position also should be ignored.

On this study, I wanted to incorporate some data, and I wanted to look at it fairly. Get all the picks out, and see what’s happening.

There are different ways to handle such an endeavor. If we wanted to get after it for a full day or two, I suppose we could create a full grade for each player. We could look at games played, Pro Bowls and values of contracts (the value of the second contract is a nice indication of how good the player has been).

I went with a simple version. I went down the list and compared the two players – the running back versus the next player chosen. If there was a clear winner, I put a black dot next to his name. If the players were similar tin value (such as Leonard Fournette vs. Corey Davis or Josh Jacobs vs. Hollywood Brown), I didn’t give either player the black dot. And if neither player was any good, I didn’t award a dot (no award for being less crappy than the other guy).

Additionally, if either player was what you might call a home run pick, I put that player in bold. These are guys who in hindsight should have been picked a lot earlier – 10-20 picks or more. Early in the second round of the 2018 draft, for example, the Browns selected Nick Chubb 35th – a great pick. But Darius Leonard went next in that draft, and he’s arguably been even better. If we’re re-drafting today, a bunch of teams would select Leonard over Chubb. I chose to put both of those guys in bold and not award a black dot to either.

Totaling up my grades (and apologies if I erred on any of them), I see 16 times where the running back was the better pick. I see 18 times where the non-running back definitely should have been chosen earlier. And I see six of the big-time, “home run” picks in each column.

I don’t see evidence that teams are misfiring by selecting running backs early. For the 2022 draft, Kenneth Walker (pictured) and Breece Hall to me look like very good prospect – guys who should be selected in the second round. (I don’t see either as a slam dunk kind of guy who should be chosen in the first round.)