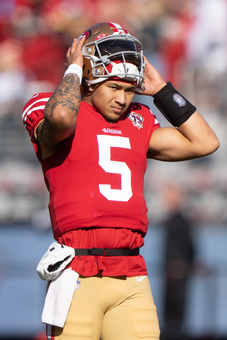 Gold to be found in second-year quarterbacks

There’s a lot of depth at quarterback – plenty of great prospects. But there will also be some notable players at the position that people aren’t thinking as much about. Specifically, second-year players.

Five years in a row, some of the best draft picks at quarterback have been second-year player who got a lot better.

Back in 2017, you had Carson Wentz, who was on his way to the MVP award before tearing his ACL in the 13th game. This was back when he was an ascending player.

In 2018, we had Patrick Mahomes throwing 50 touchdowns in his first season as a starter. Another second-year quarterback, Deshaun Watson, put up the 5th-best numbers that year.

In 2019, it was Lamar Jackson. He played well in the second half of his rookie season, then moved up to MVP level in this season, with 43 combined touchdowns and 1,206 rushing yards. Josh Allen also moved into the top 10 that year.

In 2020, Kyler Murray was the No. 2 quarterback. His ascension wasn’t as notable, with him having been 6th as a rookie.

And last year, Justin Herbert, Joe Burrow and Jalen Hurts all finished with top-10 numbers. Herbert was like Murray – it was already apparent he was good. Burrow was coming off an ACL surgery, while Hurts is a run-pass guy.

The chart below shows all second-year quarterbacks since 2000 who’ve finished with top-10 numbers. I often use per-game figures with quarterbacks, but I’m using cumulative stats this time. I see 21 quarterbacks, so about one per year. But it’s picked up recently, to where it’s more of a two-per-year rate.

Of the 21 quarterbacks, only eight finished with top-20 numbers in the previous season. They’re tagged with black dots. It’s the other guys (the players not tagged) who were the ones moving up strongly and outperforming where they were selected in drafts.

As luck would have it, we’ve got a big load of second-year prospects this year. There were five selected in the first round: Trevor Lawrence, Zach Wilson, Trey Lance, Justin Fields and Mac Jones. And the Texans have Davis Mills, who threw for more yards than any of them in the second half of last season.

Some of these guys, I’m thinking, will be very notable picks. With Trey Lance and Justin Fields, they fit the Hurts mold as runners. Fields plays for a terrible team, and without much around him. And Fields doesn't look to run as often as Hurts does.

Jones is the opposite of those guys: much further along as a passer but gives you nothing on the ground.

The Jets have a bunch of good receivers around Wilson, but he was remarkably terrible last year. Lawrence was also pretty lousy in his first year, but he still believe in his overall talent.

In the chart below, the stats are a little different than what you’re used to. The yards show the total combined rushing and passing yards. And the same with the touchdowns – combined total passing and rushing touchdowns. I did this so the chart didn’t get hopelessly large. The final column shows the production from the rookie season – starts, total yards, total touchdowns and fantasy rank.