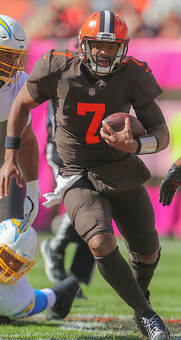 Jacoby Brissett has been better than I was expecting as a fill-in quarterback for the Browns. In general, he’s been able to operate the offense. And he’s been particularly good on quarterback sneaks.

Brissett has passed for 220-234 yards in four straight games. (Not great, but a little more than I was expecting.) And he’s been good enough that the Browns after five weeks rank 4th in scoring. Only five offenses have generated more yards.

But it’s short-yardage rushing where he really excels. In that part of his game, he’s been on par with what you would expect from Josh Allen or Jalen Hurts. Brissett is large, and he’s willing to push into the pile and pick up tough yards.

The Browns have used Brissett 9 times when they’ve needed 1 yard to either score or keep a drive alive (third down or fourth down, with 1 yard need). So purely off the numbers, he ranks No. 1 in that area right now.

Brissett has played well enough that it’s fair to wonder if he can keep that team afloat until Deshaun Watson takes over late in the year. The Browns are 2-3, but they easily could have a few more wins (Brissett in each of those losses threw a crucial interception in the fourth quarter).

But the topic I’m addressing here is effectiveness in short-yardage rushing (important in fantasy – particularly TD-only format). Thirty players so far have carried at least 3 times in short-yardage situations. Brissett ranks No. 1 on those plays, while another Brown (Nick Chubb) ranks last (just 1 of 4). So when the ball is on the 1-yard line (in my opinion) it shouldn’t be a given that Cleveland is going to Chubb.

Other names that stick out (in short yardage situations):

Jalen Hurts has converted 13 of 15. He’s been very good, and with the most attempts in the league. At Arizona, they were consistently using Hurts as a bulldozer runner on those players, with running back behind helping to push him forward.

Taysom Hill has gone 4 for 4 on those plays. I think the Saints will continue to use him plenty – he’s better in those situations than Alvin Kamara.

Rachaad White, I notice, has gone 5 for 5 on those plays, while teammate Leonard Fournette has gone only 2 of 6. Hmm. I don't think there will be much dropoff if Fournette misses some games at some point.

Jamaal Williams has 10 of those attempts, the most of any running back. (But he has converted only 5, which isn’t very good.)

It seems like James Conner has been hurt all year, but he’s got 9 of those attempts, No. 2 among running backs. And he’s converted 8 – 3 more than any other running back.

On the following chart, quarterbacks tagged with black dots.