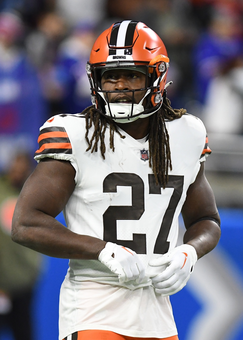 I am in a keeper league where I can only keep one RB and I was wondering what your thoughts were on keeping either Zamir White or Kareem Hunt for 2023? Josh Jacobs could be pricing himself out of Vegas and White is the next man up. Or Hunt, who is all but certain to be playing for a new team, hopefully as the undisputed starter.

I will be interested to see what buyers think of Hunt. He hasn’t been as good this season. He’s averaging only 3.9 yards per attempt, down a yard from last year. He’s running behind the same line as Nick Chubb, who’s up at 5.5. Last year, they seemed to be more interchangeable. I don’t think any team will be interested in signing Hunt to come in and be their featured back. But probably multiple team will be willing to give him a modest contract to come in and a contributor (one of two or three backs). Probably not the Browns; they’re probably ready to move on to Jerome Ford. I’ve seen Ford rip off a couple of nice kickoff returns in recent weeks; I think it’s reasonable to ponder whether he should be selected before Hunt in a dynasty draft – kind of a smartest-guy-in-the-room move. With White, he’s had a couple of nice power runs but really hasn’t played much. With his playing style and lack of experience, it would seem unlikely (insane, perhaps) that the Raiders would move into the 2023 season with him as their starter. If they choose to not re-sign Josh Jacobs, they would be adding another significant back who would probably be at least as likely as White to be the team’s leader at the position.

Much of the talk going into drafts this year was about the aging RBs. With a big number of the top drafted RBs being taken at 26 or older the theory was those were very risky picks. I was able to keep AJ Dillon in one league and got Aaron Jones in the auction. I’m in four leagues and that is the oldest RB we got. So far very satisfied with draft capital we put into top WRs paying off but I’m curious if we should be preparing for the older guys to start breaking down or if we are just going to consider RB a violent position and guys like Javonte Williams, Hall, and Elijah Mitchell are as likely to go down as guys like Derrick Henry, Ekeler and CMC?

Given the nature of the position, with collisions on every play, guys get hurt. But the numbers show that older players are more than twice as likely to break down.

I was just playing around with some stats. I pulled the numbers for the last 200 running backs who finished in the top 10 (that is the top-10 running backs for the 2001-2020 seasons). Then I looked at how these players performed in their next season (looking at the profiles of the ones that declined significantly).

Of those 200 backs, there were 27 running backs who played in fewer than 10 games the next season. Two thirds of those guys (18) were at least 27 years old, while only nine of them were younger than 27. In the chart below, I put black dots next to the names of the backs who were at least 27.

Those numbers might not seem significant, but keep in mind that in the initial player pool, over twice as many of the running backs were younger guys (only 63 of the 200 backs were at least 27 years old). So you’re getting more injuries from fewer backs.

So while those Javonte Williams and Breece Hall injuries are fresh in our minds, the bigger-picture stats indicate those were good draft picks. Just unlucky. Each player needs to be weighed on his own merits, of course, with some seeming to be more prone to injuries (looking at you, D’Andre Swift). But in general, best to select the younger running backs in August.

This is a must-win week for me. If I lose, I have no chance but if I win, I still have a shot. I've carried Watson all season and now that he's going to start, I have a choice to make. I also have Lawrence, who has worked out well for me. Lawrence is ranked a bit higher in your custom ranking for my league, but this could be a make-or-break decision. I'm counting on your insight help me win, or to have someone to blame if I lose.

I would start Lawrence. I like his matchup – at Detroit, against the defense that’s allowed the most yards and points in the league. Watson also has a favorable matchup, but I would fear that they’ll be easing him into things, relying heavily on the run. Setting aside quarterbacks, Cleveland ranks No. in rushing, while Houston ranks last in run defense. (And you don’t need to feel guilty about putting Watson on the field.)

What kickers and defenses do you like the most for playoff weeks 15-17?

Skimming over those weeks, a few matchups that stick out: