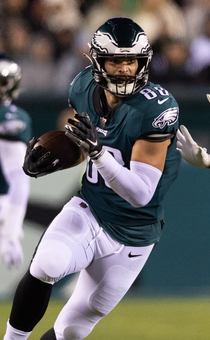 Which returning player may be big in playoffs?

ASK THE EXPERTS appears weekly from training camp through the Super Bowl with answers to a new question being posted Thursday morning. How the guest experts responded when we asked them: Which returning player could be big in the fantasy playoffs?

Obvious answer is Deshaun Watson, sidelined (suspended) until this week when he plays his former team the Houston Texans. But I like Green Bay's Jordan Love. Aaron Rodgers went out with a rib injury this week and the Packers season has tanked. There is a good chance that no matter what they bench Rodgers (for "injury" reasons of course) and try out Love in the hot seat as the starter down the stretch. If so, he could be in line for some good outings versus the Rams, Dolphins and Vikings in the fantasy playoffs. Keep him in mind.

By Karma or weird coincidence, Deshaun Watson starts his first game back from suspension in the house of his former employer. Houston is terrible, Browns should roll. Whether he is rusty or not, Watson has the potential to put up numbers in the QB1 range this week, then he should be a solid QB2 going forward. Browns need to put on a good show week-to-week, and rest assured they will showcase their franchise-altering quarterback the rest of the way.

Very tough question. Certainly Cooper Kupp if he does return but it looks like that probably will not happen. The only one I can think of would be Jameson Williams who has been on IR in Detroit since he was drafted rehabbng the ACL he tore last January. Williams was a dominating wideout at Alabama that had 1,572 yards and 15 scores last year. He is a high-character guy that ran a sub 4.4-40-time prior to his injury. He's the only one I can think of that might show up big in the final month.

Dallas Goedert, I think, looks like the best of the injured players. He can be a top-5 tight end when he’s on his game, and he seemed to be becoming more of a factor right before he got hurt. He says he’s expecting to be ready when he’s eligible to return in Week 15. If he checks out physically, I expect I’ll have him graded as a starter-quality tight end.

I’ll give you two for the price of one, tight ends Darren Waller and Dallas Goedert. Neither are guaranteed to return but both are projected to be back in time for the fantasy playoffs (Week 15), and would slot into high-volume roles at a position with very few difference makers.

"Big" might be overstating things, since the Broncos don't score touchdowns. But I think Mike Boone might be worth a roster spot in some leagues. He's back in practice for Denver, and he's approximately 10 years younger (OK 5 but still) than Latavius Murray. Whoever coaches the team the rest of this sad season will surely want to give a youngster with some theoretical upside carries and passing downs work over the wizened Murray or ineffective Marlon Mack. If the Broncos don't at least see what Boone can do they should fire the coach. They should do that anyway, but especially if he wastes too much time running Murray into the line for the next month.