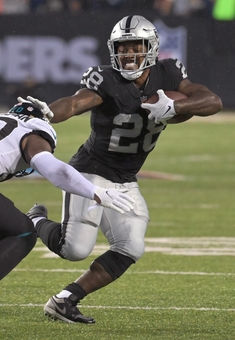 Committee back, or value?

It looks like I'm going to have Josh Jacobs on a lot of teams this year. Every story that comes out about him is negative, with a new one every day. What's interesting is that none of them actually have anything to do with him, but with people's expectations about the Raiders backfield.

Here's the latest one, from ESPN's Paul Gutierrez. He envisions Josh McDaniels favoring a committee backfield, in which Jacobs, Ameer Abdullah, rookie Zamir White and veteran Brandon Bolden all have roles.

What interests me is the willingness to pick and choose the elements of somebody's background that fit a narrative, ignoring the ones that don't. So yes, the Patriots used a committee backfield of a couple of main runners and a passing downs back while McDaniel was there. But what they didn't do is use a goal-line specialist, which Gutierrez proposes they might do with White. They didn't tend to give big roles to rookie running backs when there was a capable veteran around. And they didn't use Brandon Bolden on offense unless they had no other choice.

In those five seasons Bolden had 37 carries and 15 catches. McDaniels was his coordinator for all but one of those seasons.

I like what I've seen out of White. Talked him up in the Rookie story in the magazine. No doubt in my mind he'll be starting for Las Vegas a year from now. A nice backup to select late in drafts (not late enough these days, unfortunately), especially if you have Jacobs. But why is he going to have an offensive role?

Last year the Patriots had a fourth-round rookie on their roster, Rhamondre Stevenson. Stevenson had three big games last year: huge blowout wins over Cleveland (with Damien Harris sitting out) and Jacksonville (Harris also had a 2-TD game that day) and the Buffalo game where the team didn't pass the ball (Harris also went over 100 yards and scored that day). It was not a committee until the second half of the season, and the rookies best games were primarily when Harris was also delivering very good numbers.

So Josh Jacobs; I guess he's going to be the hill I'll die on this season. I took him in a FanEx draft a few weeks ago. I'm in a 14-team league that's drafting right now, and I suspect I'll be taking him in that one, too (I'll post a link to that and discuss it later this week or early next). Where others are looking and seeing a committee back, I'm seeing a guy who quietly is one of just nine running backs who's ranked in the top 25 at the position in each of the last three seasons.

White's a nice-looking rookie, Abdullah a serviceable third-down guy, Bolden a great special teamer and fill-in if needed. But I think Jacobs will get most of the carries and have another top 15-20 type season, then ply his trade elsewhere a year from now.