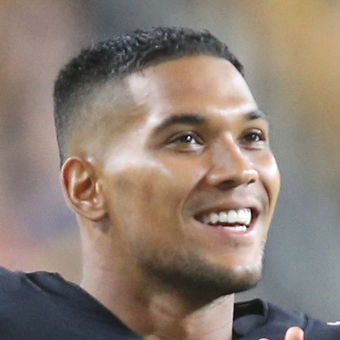 Who is the best draft value?

ASK THE EXPERTS appears weekly from training camp through the Super Bowl with answers to a new question being posted Thursday morning. How the guest experts responded when we asked them: Who is the best value in fantasy drafts this year?

Sometimes James Conner slides into the middle of the second round, which is a giveaway. I'd consider him at No. 5 overall. The talk of Pittsburgh using a committee was always a red herring (preseason usage cleared things up), he's off an RB7 season despite missing three games, and he's in remarkable shape. A monster season from Conner is likely, and some glorious profit. (Austin Hooper is my middle-round answer.)

Pianowski has been playing fantasy football for over 20 years and writing about it for 18. He joined Yahoo! Sports in 2008 and has been blogging 24/7 on RotoArcade.com ever since.

I think Larry Fitzgerald can still be a serviceable fantasy starter in larger leagues, and you can get him as your No. 4 or 5 wide receiver in drafts this summer. That is CRAZY value.

I’ll give a shout out for Darwin Thompson, though I am not sure he can be had as cheaply anymore (and it likely depends on how dialed-in your draft league-mates are). I got Thompson in the 15th round of the Fanex draft just two weeks ago but those days are probably long over. I’ll go at quarterback though actually -- I am liking Jared Goff more and more. Goff is being somewhat drafted in the whatever quarterbacks range yet he is fantasy elite. We all remember Goff having a tough close to the season last year especially after Cooper Kupp went down and then also after Todd Gurley got hurt (albeit leading the Rams to the Super Bowl) but people seem to forget the epic production he was putting up before that. From Weeks 1-11 last year, Goff averaged 322 passing yards and 2.6 touchdowns per game as the No. 2 quarterback behind only Patrick Mahomes. Goff has tremendous weapons and an exceptional offensive coach. I expect more uber-big numbers. You have to love Goff’s receivers -- Kupp, Robert Woods, Brandin Cooks and not to mention Josh Reynolds as they form a lethal foursome combo. I also think Gerald Everett will continue to develop at tight end (and he’s a nice talent also) plus Darrell Henderson is going to have some big receiving plays as well.

Both of the Carolina wide receivers, I think, are undervalued. DJ Moore and Curtis Samuel. They both began last season as reserves. Now they’re definitely starters and the key pass catchers in an offense that I think will be very good. They’re going to catch a bunch of passes, and they’ll both also be used regularly on end-arounds, adding a few more yards. Cam Newton has the foot issue, but they’re saying he’ll be fine for the opener.

At 27 now, Devonta Freeman began his career on a high note, but the last two years he has missed 16 games, including 14 in 2018. He seems like a high-risk player going into 2019, sort of an injury waiting to happen. With Tevin Coleman gone, the RB2 position appears to be going too Ito Smith, Last year he only averaged 3.5 yards/carry and his longest gain was only 19 yards. If something should sideline Freeman, I look for an unheralded rookie Quadree Ollison to step up and carry the load, with Smith playing mostly as a change of pace back and on third downs. Ollison could be a decent pickup late in your draft.

Mohamed Sanu is not special, but to this point, at least in my leagues, he’s been absolutely free. Last weekend I took him in the “draft” portion of an auction — when every remaining team was down to $1 per needed player, so nominating a guy meant winning him automatically. What did my $1 buy? It isn’t just that Sanu is locked in as the WR3 for one of the league’s best passing teams, so he’ll do a little something no matter what. He’s also a double-handcuff, ready to step in for either Julio Jones or Calvin Ridley if necessary and produce like a legitimate fantasy starter for as long as the better guy is out. I’m not saying Sanu wins the league for me ... but it’s certainly possible he could be in the lineup when I do win the league. Tough to beat that for free.

David Montgomery has risen on draft boards most of the summer and he is still a tremendous value with his mid-fourth round ADP. His schedule and offensive line are both above average and the Bears selected him specifically to become the next dual-threat workhorse that HC Matt Nagy employed when he was in 2016 and 2017. He made Spencer Ware a star with 1,00 yards in 2016 and then Kareem Hunt blew up as a rookie under Nagy coming from the same third round and exact same size as Montgomery. There’s simply no chance that you’ll ever draft Montgomery this cheaply again.

A few weeks ago the answer was Matt Breida, but that's all over with -- now he's being overdrafted as people wise up. So I'm going to throw out a couple of guys I'm selecting pretty late. One is Noah Fant. Seems pretty clear he's going to be Denver's starting tight end and catch a whole bunch of short passes from Joe Flacco. The second is Adam Humphries. Investing in the Tennessee passing game is unappealing to say the least, but we're not talking about Corey Davis -- we're talking about a slot receiver who should be peppered with passes by a lesser quarterback who will opt for the safe, easy short throws whenever he can. And Humphries is basically free in the fantasy drafts, as in 17th or 18th round (I don't let him fall any further than that, so maybe even that's too early).