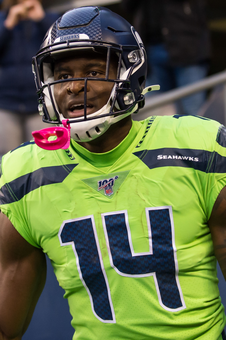 Which rookie receiver will have the best career?

When I look at the rookie receivers, I don’t see a standout player. I see a top tier of four players: Hollywood Brown, Terry McLaurin and the two Mississippi guys – DK Metcalf and A.J. Brown. If I were walking into a dynasty draft today, I would be torn between those guys.

Metcalf has some limitations. He’s so huge, that he’ll always have problems with quickness and change of direction. But he’ll be working with Russell Wilson for the foreseeable future, which is awfully comforting.

Marquise Brown to me looks like another DeSean Jackson. With his speed, he’s going to score a bunch of long touchdowns in the coming year. But he’s tiny, so durability could be an issue. And I don’t know that he’ll ever be a consistent high-volume option, who’s cranking out 80-catch seasons year after year.

A.J. Brown reminds me of Anquan Boldin. He’s not a burner, but he understands the game and how to use his size. He looks like he’s got a lot of productive years in him.

After those initial four, I’m very firm on my fifth wide receiver (among the rookies). Deebo Samuel definitely has the physical traits, and he looks like he’s going to develop for the 49ers. If I were selecting a San Francisco receiver, I would definitely select Samuel before 32-year-old Emmanuel Sanders.

I like the situation Parris Campbell (41st) is in; I am a believer of Frank Reich and the Colts. But Campbell hasn’t shown me quite enough that I can say for certain that’s he’s going to develop into a good pro. He played in a simplified role at Ohio State, so he needs to be coached up in terms of NFL route running. Curtis Samuel preceded Campbell in that role with the Buckeyes and started emerging in his second season with Carolina; it presumably will be the same with Campbell. But if we’re looking at where guys are at right now, there’s no debating that Deebo Samuel is way ahead of him right now.

On the following chart, rookies are tagged with black dots. I’m assuming PPR scoring, and these are full dynasty rankings – with fantasy franchises holding the rights to players indefinitely. So on these, I’m not looking at just 2019 and 2020, but the next few years. (At the same time, we must factor in that fantasy teams will be making dozens of roster moves, as prospects become available on the waiver wire.)

For dynasty rankings, I hit one position each weekend. Last week it was running back. It will be tight ends next week. To look at previous installments, use the “Past Issues” links on the right side of the page.

These rankings are put together by hand. Basically, I’ve got a list with the top 4-6 receivers on each team. I pick out the top 100, then comb over the list for about an hour, moving guys up and down until it feels right.