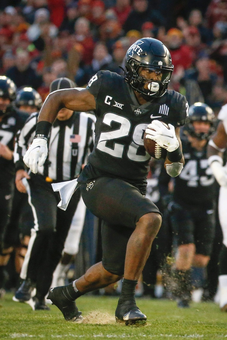 Round 2 and 3 take six off the board

No running backs were selected in Round 1 of the NFL Draft, which wasn't a huge surprise. Some thought 1-2 might slip in late in the round, but it wasn't to be. But those backs -- Iowa State's Breece Hall, Michigan State's Kenneth Walker -- did go in last night's second round, and four more were gone by the end of Day 2.

From a fantasy perspective, none of the six looks to be stepping into an immediate starting job. But if recent form holds, 2-3 of them will wind up having at least some value right away.

Over the last 10 years, there have been 57 running backs selected in the second and third rounds; close to 6 per year, just like this one. Of those backs, 14 have put up 1,000 total yards as rookies; seven more have finished with at least 850. A dozen have scored 8-plus touchdowns.

Just a handful of immediate stars, ala Kareem Hunt, Alvin Kamara and Jonathan Taylor, but a lot of rookie contributors, and a couple of weekly starters in fantasy leagues, on average. (Table shows rookie year stats for each player.)

Hall has been the 1.01 in a lot of early rookie drafts. Selected by the Jets, he joins a backfield that had a credible rookie season from Michael Carter last year. Not a high-powered offense, and not a clear path to starting. But Carter was a fourth-rounder who took a little while to take a leading role, and Hall will get the opportunity to play right away. Would not be surprising if he emerged as the superior back by midseason (but no one should be drafting him as a 2022 starter).

Walker went to Seattle, which is groan inducing. There have been hints that Chris Carson (neck) may not be able to return, which this selection further indicates. But the Seahawks are paying Rashaad Penny, who was one of the better backs in the league down the stretch last season, $5.75 million for 2022. He's starting, and Walker is vying to be the No. 2. These players get hurt and Seattle can be fickle with its roster; they're probably going to run a lot since their quarterbacks are Geno Smith and Drew Lock. But difficult to have confidence in Walker moving ahead of Penny this season.

James Cook, half of a tandem with the as-yet undrafted Zamir White at Georgia, went to Buffalo. This is interesting (Buffalo was a popular mock-draft landing spot for Hall), with Devin Singletary ripe to be replaced at some point in one of the league's best offenses. But Cook (Dalvin's younger brother) is on the small side (5-11, 199 at the combine, and he was listed at 190 in college), and probably most suited for a committee role rather than as a feature back. Good pass catcher, but Singletary can do that too. A tandem seems likely, holding down the appeal of both. (Aside: White should be selected early today, and I'll be interested in his landing spot.)

Tampa Bay third-rounder Rachaad White does have feature back size (6-0, 214), and a clear path to the No. 2 job in Tampa Bay. If Leonard Fournette gets hurt, White will be a popular pickup in fantasy leagues. But he's not going to start games until that happens, and might not have a huge role in the offense as a rookie.

Tyrion Davis-Price was selected by San Francisco, and you have to take notice when a Shanahan team selects a running back. (Although if history is any indication, best to see who they select in the sixth round today.) The Louisiana State back is big (6-0, 211) and ran a 4.48 at the combine; his early selection makes it seem like he'll be headed for work behind Elijah Mitchell, and doesn't say much for Trey Sermon. But just a flier in an annually muddied backfield.

It wasn't much of a secret that Washington would draft a running back early, and they got an intriguing one in Alabama's Brian Robinson. He's huge (6-2, 225) and was ultra-productive last year, rushing for 1,343 yards and 14 TDs and also catching 35 passes. His first three years he was stuck behind Damien Harris, Josh Jacobs and Najee Harris, and those guys have worked out pretty well in the NFL. Needless to say, this is not great news for those with Antonio Gibson in dynasty. Not an ideal landing spot for Robinson, either (Gibson is pretty good), but he's definitely going to be the No. 2 in this offense (JD McKissic on passing downs).

So with almost all of these backs -- maybe all of them -- it would have been nice if they'd landed somewhere else. It's not terribly surprising (teams like to have two good running backs these days), but you'd prefer at least one of them seems to be stepping into a starting job.

The history, however, suggests a couple of them will make a big impact as rookies. If I had to guess right now, I'd be looking at Hall with the Jets and Robinson in Washington as the most likely to start some games this year, with Cook also in the mix. Long-term, seems like Hall, Walker and perhaps Robinson have the most appeal in dynasty leagues. At least for now; let's see what the fourth round brings.