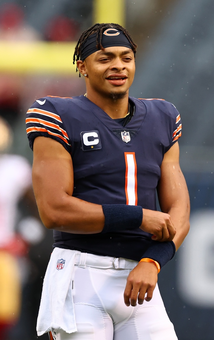 Mobile quarterbacks can be harder to forecast

Mobility is key at quarterback, with the way it’s richly reward in most fantasy formats. But that quality is harder to grade, with players needing to evolve to doing more from the pocket – reading and reacting to defenses, and throwing with anticipation.

Consider Jalen Hurts. He’ll probably run for 800-plus yards and 8-plus touchdowns this year, giving him a chance at being a top-5 quarterback this season. But can he progress enough as a passer that he’s even still a starting quarterback when the Eagles take the field in 2023? That makes it harder to grade him in dynasty, when you’re trying to factor in where he might be in 2-3 years.

A pair of Hurts-type prospects went head-to-head in Week 1, and both were underwhelming. They were hindered some by weather, but neither Trey Lance nor Justin Fields looks likely to get up to an acceptable level as a passer anytime soon. Fields completed only 8 passes. His first attempt was an ill-advised floater that easily could have been intercepted and returned for a touchdown. On his second pass play, he held the ball way too long, taking an unnecessary sack. With Lance, he looks like an athlete who hasn’t played a lot of quarterback; the 49ers have averaged 14 points in the three games he’s started.

Russell Wilson can also be brought into the mobility discussion. Not that he isn’t way above guys like Fields and Lance as a passer. But mobility has been a huge part of his game, with his ability to escape from pressure, creating big plays and running for key first downs. As he closes in on 34, he can’t run the way he did for the bulk of his career. He needs to operate from the pocket more often now, making me think the Wilson the Broncos are getting isn’t going to be nearly as good as he was during his peak years in Seattle.

With Wilson in mind, how do we grade Kyler Murray? Murray is quick as hell, but as he has to move to a more pass-oriented game, can he continue to be effective. He’s even shorter than Wilson and hasn’t been as good at keeping himself out of harm’s way. And if the Cardinals fire Kliff Kingsbury at the end of the year, how will Murray fit into what the team is doing in 2022? He’s only 25 but doesn’t to me look like a guy who’ll have a long career.

Lamar Jackson is an elite runner; he’s gone over 1,000 yards twice. But they’ve been unable to get him over the hump as a passer, through some combination of the structure of the offense not being quite right and him simply not being a good enough passer, with too many missed throws. He passed for only 213 yards in a lackluster opener against the Jets.

A key quarterback in the top 10, I think, is Deshaun Watson. He’s suspended for 10 more games, of course, but once he comes back, I think he might be my No. 5 quarterback – he’s 7 years younger than a bunch of the quarterbacks in this area (Stafford, Cousins, Wilson) and I have more confidence in his ability to evolve as a passer than Jackson and Murray.

Our in-season rankings are generated using stat projections. We calculate expected passing yards, passing touchdowns, rushing yards and rushing touchdowns for each player, and the guys with the most overall stats come out on top. The dynasty rankings, on the other hand, are done by hand – put together a list and comb over it, moving guys up and down until it feels right.

Next Saturday in this space, I’ll turn my attention to the long-term rankings for running backs.